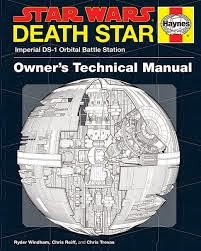 From there the book dissects the Death Star deck-by-deck covering each and every facet and nook and cranny of the impressive planet killer.  You’ll learn about its propulsion, weapons, personnel, security, command center, surface trenches and defense weapons, air shaft and other key locations and functions.

From there you’ll proceed to the Death Star II and a handy size comparison chart allows readers to size up just how large each spacecraft or station is.

Beside full color illustrations, charts, diagrams and photos the book also contains historical and informative text about each and every craft.  If you’re a Star Wars fan you MUST have this book.  If only the Rebel Alliance had such a book-many lives would have been spared.
Posted by BAM at 8:45 AM