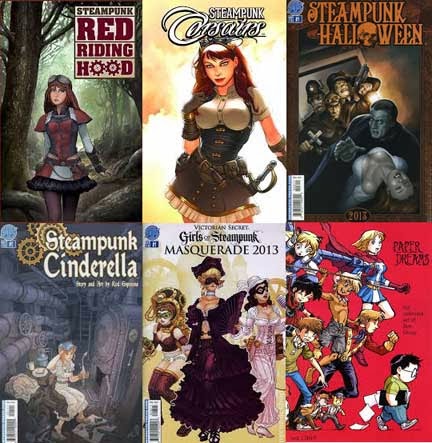 Established in 1984 by Ben Dunn, Antarctic Press has turned out literally hundreds of titles-both in black and white and in color.

I’ve followed Antarctic’s progression over the years and I am constantly amazed how it is ahead of the curve when it comes to publishing comic books.

For example: Zombies-Antarctic did them first, American Manga: ditto, exclusive creators: likewise-the list goes on and on.

It says a lot about a company and its founding father when top tier talent stay loyal to it over the years.  Granted some have done additional work for the ‘Big 2’ but they still stay loyal to Antarctic and turn out some the best independent creator owned properties in the business.

While Ben Dunn is the proprietor of Antarctic Press he is also a talented artist and writer.
Paper Dreams: The Collected Art of Ben Dunn is a small square bound, paperback book containing not only Ben’s Antarctic work but a plethora of other projects and non-Antarctic comic book characters as envisioned by Ben.

It’s a remarkable collection of art from a true industry professional.

One of Antarctic Press’s longtime artists is Ron Espinosa.  Known for his incredible detailed drawings, Ron is a true workhorse turning out story after story in all genres.  He continually amazes me with his talent.  Is there nothing he cannot draw and draw well?

Gorgeous women?  No problem. Complex machinery? Piece of cake.  Grand vistas and towering architecture?  A walk in the park.

Recently Rod turned out four #1 issues all of them related to Steampunk.

Steampunk Halloween finds the shipwrecked crew of a royal ship on a deserted island.  After a run-in with its mutinous crew the surviving officers and royalty discover, to their dismay, that it’s not just the mutineers they need to worry about-can someone say the undead!?

Steampunk Red Riding Hood turns the fairy tale on its ear as Granny is transformed into a werewolf hunting techno-head, Red Riding Hood her Steampunk enhanced warrior and the wolves into Werewolf gangs that bully and blackmail the human population.

Eventually the two opposing sides unite against a common foe.

Steampunk Cinderella offers a new twist on happy ever after where Cinderella has a talent for technology, the Fairy God Mother is replaced by the ghost of her father and while she winds up not getting the prince she wanted she still gets the ‘royal’ treatment.

Steampunk Corsairs finds the amorous female crew of a Victorian submarine plundering the treasure of the Spanish armada and stealing a valuable map to the mystical land of Europa.  Look for a lot of chills, spills, thrills and frills of the scantily clad Corsairs.

All of Rod Espinosa’s titles are pure delights to read and look over again and again.  Is it any wonder he has been nominated for an Eisner Award?

Victorian Secret Girls of Steampunk Masquerade 2013 showcases the beautiful art of longtime Antarctic collaborator Brian Denham.  If you like looking at Victorian Steampunk beauties then this is the book for you and check out the Airship Enterprise. 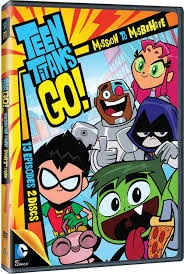 They're back! As the old saying goes, "You can't keep a good superhero team down."
The Teen Titans return in a brand new animated series from the Cartoon Network on DC Nation.

The old gang is back: Robin, Beast Boy, Cyborg, Raven and Starfire, although in a much more Chibi sort of way.

Sure the stories are fun and the action never stops but get ready for a lot more sight gags, rude childlike humor and a much more 'cartoony' take on DC Comics' favorite young heroes: The Teen Titans.

Besides fighting bad guys (old and new) the Titans like to kick back, eat, play video games, listen to music and behave just like (you guessed it) teenagers.

The Season 1, Part 1 DVD collection from Warner Bros. contains 26 all-new episodes and the original voice actors are back as well!  With over four hours of Teen Titans terrificity (is that a word?) get ready for laughs, nail-biting and more fun than you can shake a super villain at!
Posted by BAM at 6:10 PM 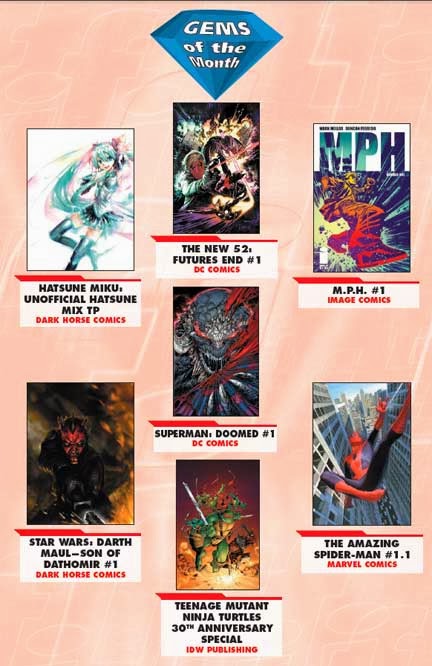 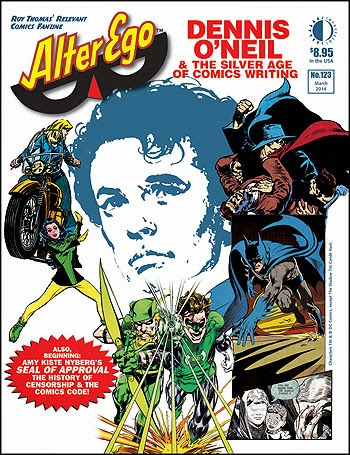 This issue of Alter Ego from TwoMorrows focuses primarily on the career of writer Denny O’Neil and the books he created, reinterpreted and reinvented.  Contents include:

Writer/Editorial: The Missouri Breaks
“I Feel Like My Career Has Gone Full Circle”
Dennis O’Neil talks to Richard J. Arndt about his first decade in comics as a writer & editor.
Seal Of Approval: The History Of The Comics Code
Beginning our lushly illustrated serialization of the 1998 book by Amy Kiste Nyberg.
Mr. Monster’s Comic Crypt: Now That’s A Fan! (Part 2)
More nutty fans—both inside & outside comics—studied & prodded by Michael J. Gilbert.
Tributes To Lee Ames & George Gladir
re: [correspondence, comments, & corrections]
FCA (Fawcett Collectors Of America] #182

Look for lots of original art, archival interiors and covers and interesting insights on the comic book industry form those who were (and are) a part of it.
Posted by BAM at 1:19 PM

The Royals Masters Of War #1 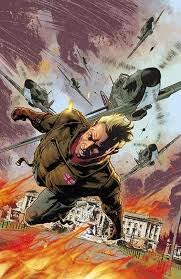 Imagine yourself living in a world (specifically Britain) where your royal family all possess super powers.  Now, picture the time as WWII.  The Germans have devastated your island kingdom, thousands of people are dying and yet the ‘Royals’ refuse to get involved-that is-except one.


Tensions and turmoil are at their peak.  But, the compassionate act of one super-powered Royal has devastating effects.  Once he uses his power to fight the enemy he becomes aware that it is not only England who has super-powered Royals.

The Royals Masters Of War promises to be a series that will be full of surprises and with its unique take on ‘royalty’ and what it means when super beings make war this book is sure to be a huge hit with fans.

A great script, perfect art and subtle yet satisfying colors all combine to make the title a fun read. 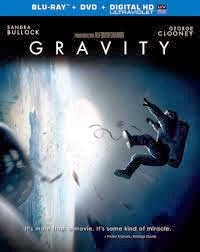 If you have not seen Warner Bros.’ Gravity at the movies you are in for a treat!  Warner Bros. has released its Blu-Ray/DVD/Digital Ultraviolet Combo featuring the ‘The Best Movie Of The Year.”

Nearly four years in the making, the movie is a triumph of powerful acting, spectacular special effects and visuals and a great story.

Sandra Bullock stars as Dr. Ryan Stone.  While on a Space Shuttle mission to repair a satellite/telescope, disaster strikes.

Several thousands miles away a foreign satellite is destroyed.  The debris from it is calculated to pass safely by the Space Shuttle.  The calculations are wrong.  The jagged metal debris smashes into the Shuttle killing everyone except Stone and veteran astronaut Matt Kowalski.

Suddenly the two survivors find themselves in a life or death struggle to survive.  The tension mounts as their efforts to maneuver to a nearby foreign space station seems doomed from the very start.

Amidst the stygian blackness of outer space and hovering about the crystal blue sphere of Earth their brave attempts for survival pushes both to their limits-especially Dr. Stone.

The Combo pack also comes with nearly three hours of extras about the making of the film.  Extras include a featurette narrated by Ed Harris, a short film: Aningaaq, Shot Breakdowns and more.
Posted by BAM at 7:13 AM