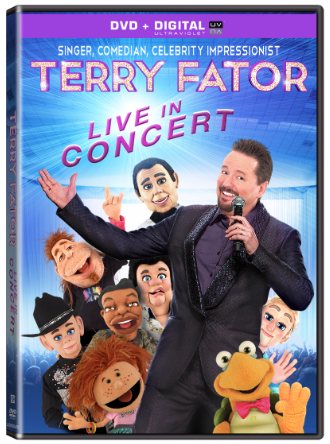 When Terry Fator first appeared on America’s Got Talent in 2007 he was met by skepticism from the judges and the audience.  One of the judges, David Hasselhoff, even shook his head and muttered, “Not a ventriloquist!”
What happened next shocked everyone.  When Terry, voicing Emma Taylor: the little girl puppet, sung a perfect imitation of a famous soul singer, blew the judges and audience away.  It was all uphill from there and in a stunning finale, Terry won the competition.

From there his career was set and eventually he signed a multi-million dollar contract with the Mirage Casino & Hotel in Las Vegas where he performs to sell-out crowds every show.

Lionsgate has just released a ‘Live In Concert’ DVD of Terry’s new show which he wrote himself.  Besides bringing back some of his longtime puppet characters Terry introduces audiences to several new puppet including Monty Carlo, Berry Fabulous and others.

Singer, comedian and impressionist Terry showcases his talent with puppet portrayals, performing songs he wrote (including, in a bold move, two songs that have Christian overtones. Something he was told that would never fly in Las Vegas) and one-on-one banter with the audiences.  His Dolly Parton bit is hilarious.

Also included on the DVD are a commentary, preshow featurettes, a music video and more.
Posted by BAM at 5:58 AM