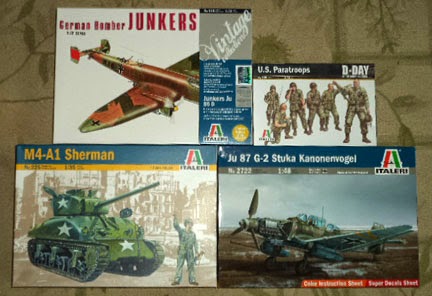 A big Boyce McClain’s Collectors’ Corner welcome to Italeri the plastic model kit manufacturer from Italy.
Although I’m familiar with the name Italeri and have seen its models on hobby shop store shelves I’ve never had the opportunity to examine anyof  its models-until now.

Recently Italeri released four new models and after looking at them I’d like to make this general observation about them and then go on to greater detail about each model kit.

First up are the boxes the models come in.  Each features a beautiful full color painting of the model contained within.  Instead of being wrapped in plastic the boxes are secured by two plastic sticky tabs that when sliced with an X-acto blade allow the box to open easily.

Within each box are parts attached to part trees.  The part trees themselves are of slightly heavier construction than seen in most model kits and the parts are secured firmly to the tree.

Some slight  flashing and tabs are evident but are easily trimmed and the parts fit snuggly together with no gaps or unevenness.

Decal sheets are also included as is an instruction sheet to guide during assembly, painting and decaling.  A brief history (in several languages) of the history of the object the model is fashioned after is included in the instructions.

Overall the model kits are pleasing to the eye and well designed.

Four models were recently released and they include two aircraft, a tank and figures.
First up is the smallest kit of the bunch: six D-Day U.S. Paratroopers.  Consisting of two part trees the model has easily detachable parts and because of its size and simplicity the assembly is easy as the parts for each soldier are grouped together.

Paint application and colors are illustrated on the back of the box. All six figures come with weapons, one carries communication equipment and each looks absolutely authentic in their period military garb and accessories.

The Junkers JU 86 D1 aircraft model is a special Limited Edition rerelease of the original 1973 release of the same model.  A special Vintage Collection slipover sleeve with an open slot for a silver sticker designating the model’s number out of 2500 makes it a real collector’s item.

The WWII German Bomber model is scaled at 1:72 and packed with details.  Its long fuselage easily accepts the two front wing assemblies, rear wing and tail combo and upper and lower gun turrets and wheel assembly.  Two crewmen are included that are easy to spot through the transparent front windshield and top gunner position.
One of Germany’s earliest bombers the original was not well armored and had moderate firepower.  However as the war progressed  improvements were made and the Junkers became formidable bombers that boasted an impressive run.
Check out the open upper gunner canopy, tri-blade propellers and  upper fuselage and pilot compartments-talk about detail!
The M4-A1 Sherman Allied Tank while small in size as compared to most other WWII tanks still made for a formidable foe.  Light, maneuverable and able to get into places larger tanks couldn’t the Sherman Tank had a small crew but still packed quite a punch. Its 76 mm main gun and it’s upper and lower mounted machine guns kept most adversaries at bay.
A medium size tank, the Sherman had little effect on the larger Axis tanks.  Still with its smaller size and greater speed it relocated easily and made for excellent coverage for Allied troops.
The model includes separate treads for easy snap on and removal and a single figure.  Parts are already military green so paint application is minimal, the white deals really pop and once assembled the Sherman model appears for all intents and purposes a perfect smaller version of its larger namesake.

Germany’s Ju 87 G-2 Stuka Kanonenvogel was used primarily against the Polish during the beginning days of WWII.

As the war progressed it became evident that the Stuka was far outclassed by its Allied opponent’s aircraft.

The Stuka then shifted responsibilities to ground support and that decision proved vital to Axis forces.  The Stuka was so successful in its new assignment that it became a thing of legend.  Later the Stuka would prove effective against the Russian armored divisions.

The Italeri model (scaled at 1:48) includes a color instruction sheet excellent for paint and decal application and super decals.

Parts fit snuggly together and of all four models released the Stuka is the most complicated with the largest number of parts.  From  its three blade propeller to its slide back canopy, retractable landing gear to its firepower the Stuka model is an impressive piece of model making.

Careful attention was given to its engine, undercarriage weapon mountings, interior and exterior canopy details and rear wing and tail assembly.  No matter how you stack it, the Stuka is a superior model.
Posted by BAM at 8:05 AM