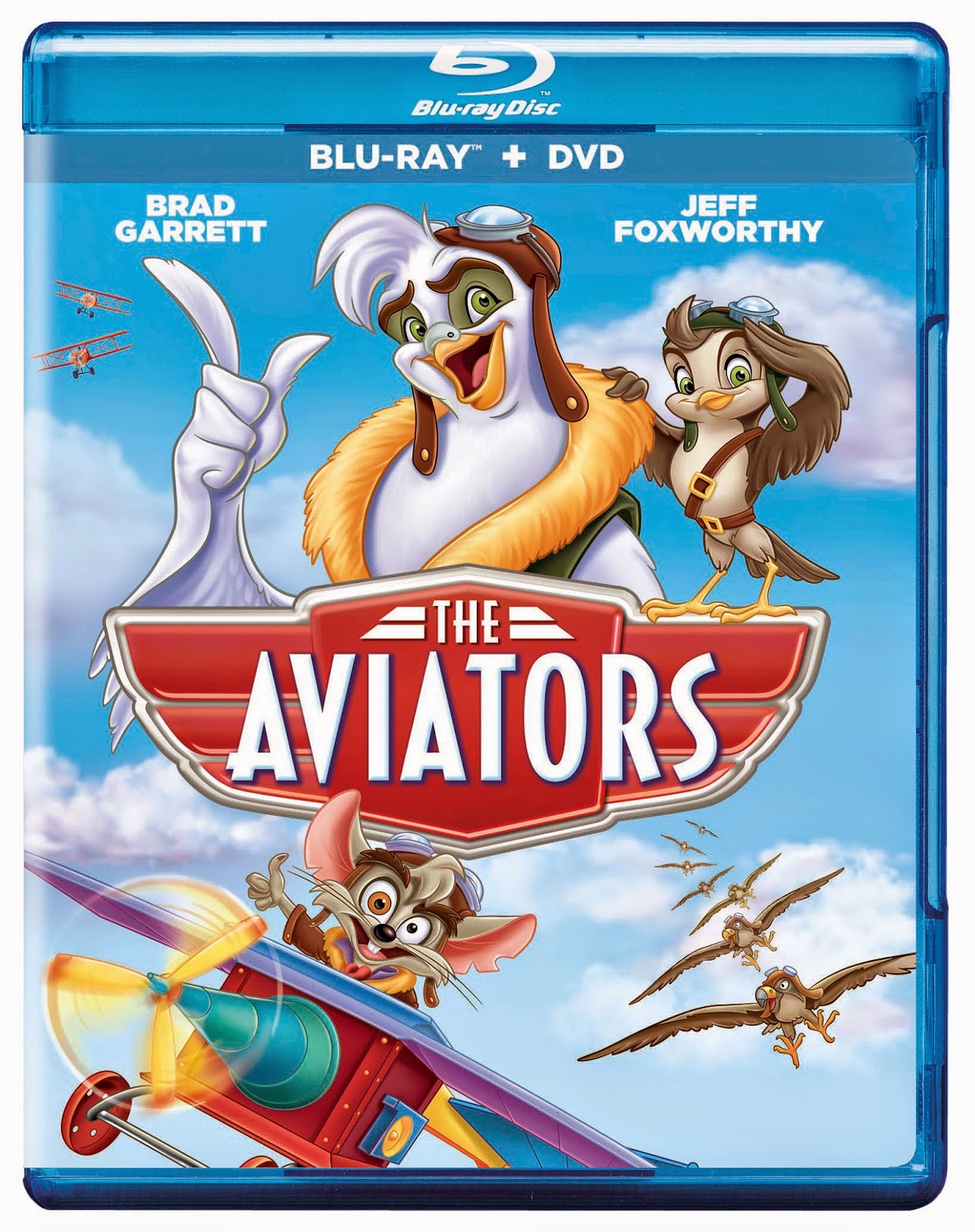 Brad Garrett and Jeff Foxworthy are just two of the stellar cast of actors lending their voices to the animated adventures of a group of carrier pigeons and their mouse friend that team up to defeat their enemy and save the lives of American soldiers.
Get ready for some high-flying adventures and acrobatics as the feathery and furry friends join the war effort.  It’s exciting, dangerous and fun all wrapped up in one Blu-ray/DVD combo from Cinedigm. 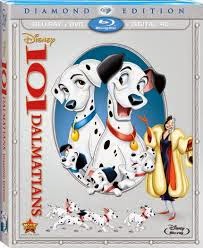 Pongo, Perdita and their pups are back and face off against Cruella De Vil, the wicked, rich matriarch who wants a new Dalmatians fur coat.

It’s a struggle to survive as 101 Dalmatians attempt to reunite with their master and escape Cruella’s henchmen in a slapstick, hold-onto-your sides, adventure wroth with danger, laced with love and sprinkled with laughter.

If you've not had the opportunity to see this Disney classic I encourage you to watch it in its new remastered version: clear-as-a-bell re-release.

Filled with the tried and true Disney magic the story is a real family pleaser (no need to worry about foul language or unexpected innuendos).

This is animation as it is meant to be seen in its original format-cell animation.

Disney artists pulled out all the stops with clever and often hilarious character representations (both human and animal)  Take a moment to check out the farm animal and dog representations.  Each and everyone is distinct and individual.

Cruella De Vil ranks as one of Disney's top villains. So much so that she was recreated as a real person in the live-action Dalmatian movies.

Included with Combo Pack are a new animated short taking up where the movie left off,  a special featurette about the film, conversations with the Disney team, a very special 1962 Dalmatians short and more as only Disney can provide.

The entire package is wrapped up in a special silver slip case which include a Blu-ray, DVD and Digital HD that allows you to download the film to your favorite digital format player. 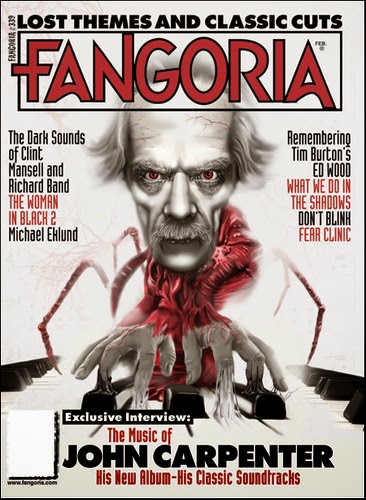 Fangoria delivers scares galore in its latest issue sporting a creepy artistic rendition of horror director John Carpenter with his 'fingers' on the pulse of movie soundtracks.
Other goodies (or is that ghoulies?) include:

MINIFEATURE: THE 2014 ITALIAN HORROR FEST Last year’s event celebrated fear from within and outside its home country.
RETROSPECTIVE: “MESSIAH OF EVIL,” PART TWO Offscreen influences couldn’t prevent this cult flick from rising from the dead.
INTERVIEWS: “THE WOMAN IN BLACK 2 ANGEL OF DEATH” The specter of the hit original was a lot to live up to for the sequel-makers.
PREVIEW: “WHAT WE DO IN THE SHADOWS” Jemaine Clement and Taika Waititi reveal how much fun it can be to live with vampires.
PREVIEW: “THE ATTICUS INSTITUTE” The government can’t contain a paranormal possession in Chris (“Buried”) Sparling’s film.
PREVIEW: “FEAR CLINIC” Robert Englund brings his dreadside manner to Robert Hall’s feature expansion of his web series.
INTERVIEW: MICHAEL EKLUND He’s the man to “Call” if you’re looking for an actor to plumb “Dark” emotions.
INTERVIEW: LISA AND LOUISE BURNS With just a few (simultaneously spoken) words, they stole “The Shining.”
RETROSPECTIVE: “ED WOOD” Who’d have thought the “Worst Director” would be the best subject? Screenwriters Scott Alexander and Larry Karaszewski did.
INTERVIEW: JOHN CARPENTER As his first solo album arrives, we talk in depth with the Master of Horror about his music. Plus: “Lost Themes” reviewed.
MINIFEATURE: JAKE FREEMAN He’s a “Protector” of the synthesized faith as he moves into movies.
INTERVIEW: RICHARD BAND His score for Dan O’Bannon’s second and last directorial venture deserves to be “Resurrected.”
INTERVIEW: CLINT MANSELL Darren Aronofsky’s singular, scary cinema wouldn’t be the same without this composer’s aural accompaniment.
MINIFEATURE: TWIZTID In their 14th year making menacing music, the duo continue bringing the “Darkness.”
MINIFEATURE: “THE PICTURE OF DORIAN GRAY” The Oscar-winning film now looks better than ever on Blu-ray.
INTERVIEW: NICHOLAS VINCE Out from behind his “Hellraiser” makeup, he has made his mark as an author.
MINIFEATURE: WILLIAM MORTENSEN New and reissued books reveal a vintage photographer with a uniquely dark vision.
DIARY OF THE DEB: “MODEL HUNGER,” PART THREE As Debbie continued to shoot, a troublesome visitor threatened to “Driver” mad.
NOTES FROM THE UNDERGROUND: “HELL FIRE” Ladies of the night meet the son of Satan, and Marc Fratto was the referee.
INTERVIEW: BRADEN CROFT “Feed the Gods” and “Hemorrhage” mark the Canadian filmmaker as an unconventional talent.
INTERVIEW: ZACK WARD “Don’t Blink” in the face of adversity, says the actor turned producer.
FEATURE: “SCARY STORIES TO TELL IN THE DARK” Among the legions of kids these books spooked were some fright filmmakers to be.
FIRST RITES Music to their fears
POSTAL ZONE Defending the “Dead”
MONSTER INVASION Previews of “The Scarehouse” and “The Casebook of Eddie Brewer,” plus the 2015 FANGORIA Chainsaw Awards ballot!
THE VIDEO EYE OF DR. CYCLOPS Reviews of “Lord of Illusions,” “Christmas Evil,” “Wicked, Wicked” and others.
DUMP BIN DIARIES CFS Releasing’s “The Boggy Creek Legacy Collection”
Posted by BAM at 3:36 PM Links to this post 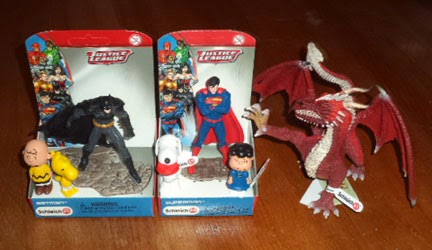 Schleich (makers of high-quality plastic toys and figures) presents some its new line of figures for 2015.

Each and every figure (based on real or imagined creatures and people) are superbly sculpted, precisely painted with mat colors and look exactly like their full size real or imagined inspirations.

Those figures that come on or in display packaged are showcased by full-color art or photos of the figures contained.

Details abound and with Schleich's new round of figures there's something for everyone from superhero fans to fantasy and real life figure miniature collectors.

Based on the Justice League figures from DC Comics' New 52 library of comic books the Superman and Batman figures stand out predominately.

Superman stands with arms folded as if gazing at an approaching enemy.

His powerful chest and torso are showcased and accented by his red, blue and yellow outfit with flowing red cape.  Take a moment to appreciate the tiny details, especially on his face and torso.

The Batman figure stands slightly crouched with Batman leaning forward as if to pounce on or pummel an adversary.

Dressed in black and gray with a huge bat emblem on his chest and with his trademark utility best around his waist, Batman looks like all business-the business to beat up bad guys!

I especially like his long black flowing cape, cowl and foreboding stance.

The Warrior Dragon is one fierce reptilian killing machine with heavy scale armor, a ridged underbelly in white and four powerful legs with clawed feet that rip and tear any opponent to shreds.

For a lighter and more gentle touch check out Schleich's Peanuts figures that include Snoopy (with red dog bowl in his mouth), his bird buddy Woodstock, Charlie Brown and his nemesis Lucy.

With the Peanuts movie due to come out soon these are the perfect figures to collect.
All look exactly like their newspaper comic strip namesakes and make a fine addition to any Peanuts fan's collection.
"Good grief! What a collection!"
Posted by BAM at 6:24 AM Links to this post 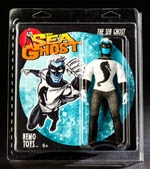 Emblazoned on his chest is a seahorse in black silhouette.  The fully-articulated figure features a real cloth outfit, solid white hands, black feet and fierce visage that is sure to strike terror in any bad guy's heart.

Displayed in a bubble pack with a full color illustration of The Sea Ghost complementing the figure the package also include a short bio of The Sea Ghost on its back along with several character sketches.

Be sure to pick up The Sea Ghost comic book from the  Nemo Publishing Group for the full, action-packed story behind the avenger of the sea.


The Cartoon Network continues to turn out animated TV shows that kids (and adults) love.  Case in point: Clarence and Steven Universe. 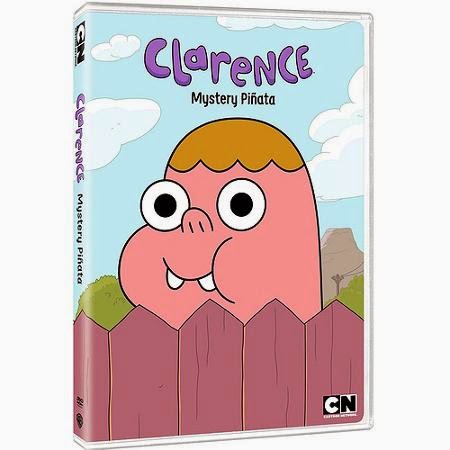 In Clarence the world is viewed through the eyes of an optimistic, curious and lovable boy who takes on life head on and enjoys every moment and invites his friends to come along.

Experience the joy and excitement of such childhood events as pulling pranks, mud fight,s sleepovers and all of the things young boys and girls enjoy while growing up.

Clarence can take a mundane event and turn it into a celebration.  Join him in 12 fun-filled episodes with the Clarence Mystery Piñata DVD collection which also includes the Pilot Episode. 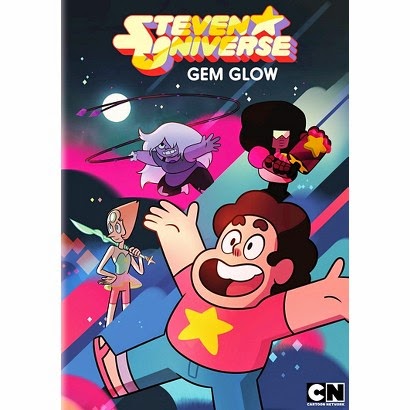 Steven Universe Gem Glow follows the misadventures of Steven Universe the ‘little brother’ to the guardians of humanity: the Crystal Gems.   Young, inexperienced  and (let’s face it) not all that bright, none of which stops him from joining his Gem Glow team and ultimately saving the day.

The Cartoon Network presents 12 episodes from the series’ first season including the Pilot Episode.

So, join in the fun, rediscover your childhood and invite the kids to come along.  You may just find that the kid in you and the kids around you have a lot in common.
Posted by BAM at 7:08 AM Links to this post 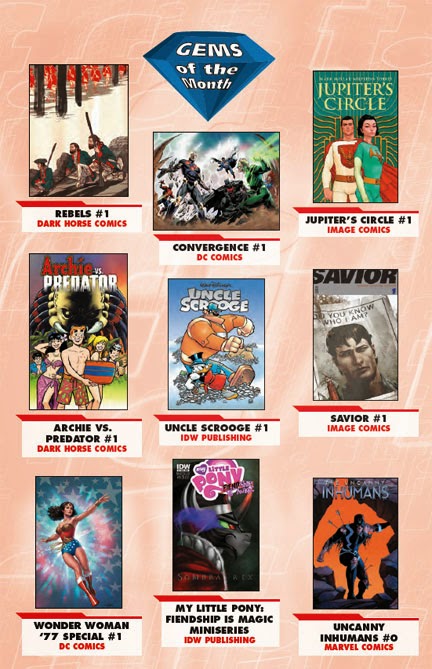 
Doctor Who: The Time of the Doctor l Doctor Who
Posted by BAM at 2:33 PM Links to this post