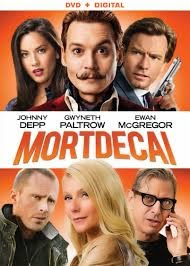 You have to hand it to Johnny Depp.  The man is a veritable chameleon when it comes to creating characters.  He’s bold, daring and takes on the challenge of creating memorable characters whenever he has the chance.
In Mortdecai, Depp plays Charlie Mortdecai; a down on his luck (and nearly bankrupt) shady art dealer who is called into service by his rival to get a stolen piece of art back.  If only it were that easy.

Throw in  Russians, terrorists, a few ‘diversions’ and murder, gunplay, chases and every other conceivable thing that could go wrong and you have a hilarious comedy that travels around the globe.

Johnny Depp’s Mortdecai is part Inspector Clouseau from the Pink Panther movies and part Agatha Christie’s Hercules Poirot.  While brilliant (with a little effort) Mortdecai is as bumbling and inept as they come and prefers to let others take the heat.

A womanizer, self-centered and afraid of violence of any sort, Mortdecai can’t help but be lovable.

Look for the DVD from Lionsgate that also includes two featurettes: On The Set With Mortdecai and Making Music for Mortdecai.
Posted by BAM at 6:24 AM