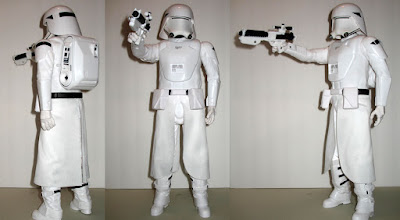 If you collect Star Wars action figures my advice to you is, "Grow up!"

Grow up to larger action figures that is, instead of those dinky three inch figures.

Jakks Pacific is a 'large' Star Wars fan. So large in fact that it has created a whole new collection of oversize Star Wars action figures.

As part of its 20-inch Star Wars action figure collection the First Order Snowtrooper is one cool figure.

Partially articulated the figure moves at the shoulders, wrists, upper legs and neck.  Display in its box or freestanding-either way it is impressive, "Most impressive."

Starting at the head the figure features a variation of a classic Snowtrooper's helmet,  The upper helmet flanges over the lower helmet covering the back of the neck.

A single black horizontal strip serves as an eyepiece against frigid conditions and whiteout and twin rebreather extended ports tipped by dull gray fixtures set below the lower jaw line.

The back of the upper armor attaches to a breather and equipment backpack complete with power couplings, communicating gear and supply nodule.

A black belt wraps the waist with a heavy white buckle and twin satchels with oversize flaps necessary for use in high winds and cold.

Heavily insulted trousers tuck in at the knees at the large arctic boots with multi-straps and ankle guards and thick heels.

A waist to lower knee wind guard hangs from the belt that is open at the front for easy movement.

Included with the figure is a blaster with scope and energy cartridge modified to fire in cold weather.

It's quite an impressive figure that is well-crafted and sculpted, cast in solid white plastic with black belt, insignia, straps and weapon components.

The figure is hollow thus cutting down on its weight.  Construction is solid, articulation points move easily, the figure is well-balanced and poses easily in various action poses.

The blaster switches easily from hand-to-hand and the backpack snaps in and out with no difficulty.


Star Wars fans are sure to love all of Jakks Pacific's Star Wars figures some of which measure over three feet tall and the cost of the figures is a real wallet pleaser.
Posted by BAM at 2:10 PM