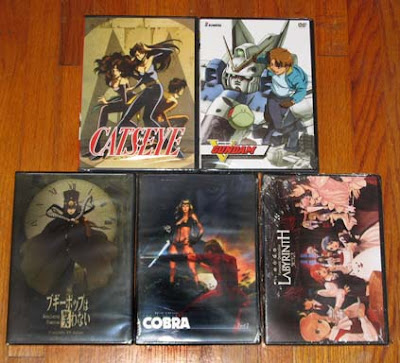 For those of you unfamiliar with Anime it is the Japanese equivalent of animation here in the U.S.
While American animation tends to be more 'in your face' Japanese Anime is often more subtle and enigmatic in its execution.
Symbolism plays a huge role in Anime as do quiet, reflective moments, much of it is focused on a single act or a character's reaction to a given situation.
Anime is linked to the Japanese psyche.  Stories represent the Japanese culture, beliefs and perspective.
Colors, textures, light and shadow, character attributes, locales and the environment intermingle to produce animation strikingly different than seen in the Western world.
Not surprisingly the influence of Anime on American animation is starting to show itself.  Compositions, pacing, music, visual and sound effects intertwine to create stories that require the viewer to pay close attention.
A simple scene of an object, a person's glance or even a shift in scenery can alter a storyline and play an important role.
Recently RightStuf! sent me five of its DVD Anime collections.  Right Stuf! has an extensive DVD and Blu-ray collection of Anime ranging from horror to humor.
The Fantastic Detective Labyrinth DVD collection contains episode 1-25 in order that introduce viewers to the strange and mysterious world of Mayuki Hyuga, the heir to the Hyuga fortune and estate.
Almost doll-like in appearance, the small, frail boy is much more than he appears.
His abilities and skills continue to grow over the years, often surprising himself.  Recently he has solved a series of mysterious supernatural crimes taking place in and about the Tokyo which had been almost destroyed 30 years ago.
He, along with his faithful manservant Seiran Shinano, help the police in their investigations while at the same time attempt to discover the secret to Mayuki's powers and unique abilities.
Dwelling in a Western style mansion believed to be nearly a century old, Mayuki, Seiran, their maid and dog fend off evil that attempts to usurp the source of Mayuki's power.
Joined by his new grade school friends, Mayuki must learn to live as other children do and struggle with his blossoming powers.
Fantastic Detective Labyrinth is a real brain-teaser that will keep you guessing as to what comes next and if what your see is really as it appears.
We never learn.  Despite destroying out world with war and pollution and moving to outer space mankind still manages to tick each other off and starts another war-only this one is much more sinister in its scope.
Determined to free itself from the corruption and political shenanigans of the old Earth the space colony declares independence from its home world.
People are not happy-on both sides.  So like so much of human history chronicles -war breaks out.
Those that rule Side 2 of the space colony begin an invasion of Earth, determined to wipe out the old order.
Unfortunately innocent civilians and the Earth itself suffer the consequences.
One such Earth boy, Uso Ewin decides not to take things lying down and so rebels.  At first unsure of hamlet and his abilities he soon finds himself adept at piloting the Victory Gundam and fights back-with consequences.
His family, friends and the entire Earth suddenly find themselves drawn into an interstellar war where brother fights against brother and family against family, with the fates of the Earth and mankind weigh in the balance.
This is classic Gundam that is in no small part responsible for the huge surge of interest in Anime.  It's cinematic scope, brilliant animation, engrossing storyline and breakout visual effects and pacing set the standard for many Anime that followed.
Grandiose in its sweeping storyline Victory Gundam Collection 1 has it all: pathos, humor, intense character development and much more.  Episodes 1-26, Clean Opening 1, Clean Closing 1, End of Episode Promos and Eyewatch Animation are all included courtesy of Sunrise and RightStuf!.
Get ready for the ultimate cat and mouse game with a little romance, intrigue, danger and mystery thrown in for good measure.
Three sisters: Hitomi, Rui and Ai Kisingi run the Cat's Eye restaurant next to the police station in Tokyo Japan.
Unbeknownst to the police the three siblings are actually Japan's most notorious jewel and art thieves: Cat's Eye.
The sisters are famous for their daring thefts and clever getaways.  No one has ever caught them, seen them clearly or know who there are.
Surprisingly the police have somehow missed the obvious connection between the restaurant's name and its three owners.  Especially in the dark is Utsumi Toshio, the police detective dead set on catching Cat's Eye.  Even more ironic is that he is the boyfriend of Hitomi.

It's a classic tale of boy meets girl, crook meets the law.
Another wrinkle in the story is that the ladies tend to steal items once belonging to their father who collected stolen art during the Nazi regime.  The ladies rationale is to make up for their father's past sins.
In order to pull off their crimes Hitomi often tips off Toshio about their next crime which she uses to her advantage because she and her sister's spy on the police as the set up their sting.
Watching Cat's Eye I get the feeling I am watching a thriller/spy TV show from the 1970s or 1980s.  Stylized images, quick editing and limited use of computer special effects and sequences give it a bit of a 'dated' look, but in a good way.
The interesting storyline sets up a feeling of tension and anticipation because the viewer is never quite sure what will happen next especially since a romance between a thief and a cop is taking place creating an atmosphere of uneasiness because viewers never know when the secret will be revealed.
The Cat's Eye DVD collection includes episodes 1-36, a clean opening and closing and trailers from Nozomi Entertainment.
Creepy-that's best word I can use after watching Nozomi Entertainment's Boogiepop Phantom Complete TV series put out by RightStuf!
I wasn't really sure what to expect.  Boy! Was I surprised!  Boogiepop Phantom dials up horror by slowly, almost painfully offering viewers glimpses of strange supernatural happenings.  Figures appear out of nowhere, things lurk in shadows, people aren't people but things, city alleys and hidden alcoves hide creepy unworldly creatures hell-bent on destroying humans and devouring them both body and soul.
Five years ago a series of grisly killings has the city in an uproar. Families are afraid to go out at night, children stay indoors to play and no one walks alone, especially at night.
Soulless creatures take on human form seeking out those steeped in depression and loneness.  They make for easy prey.  When the time comes to consume them most surrender rather than choose to live.
An experimental drug goes wrong and changes individuals to more (and less) human, granting them superhuman strength and endurance.  Indirectly it also created creatures who seek out and consume human flesh and souls (or so it would appear.)
Boogiepop Phantom pursues such creatures and 'saves' certain individuals-placing them in a dream world for their protection.
Five years after the grisly murders they resume and the battle against lightness and darkness soon escalates to a higher degree.
Can the city and its citizens be saved and what are the long-term effects of the drug?  Have reality and fantasy combined?  Does the past, present and future intermingle?
The more I watched the series the more questions I had.
What struck me the most about Boodgiepop Phantom was the imagery.  Fragments of images, flashes of light and dark and scenes shown from different perspectives give the series a unique look.
I was never really sure what I was witnessing and I believe that's the whole point.  Often what we perceive or think we see is the scariest.  For something to be truly unknown it must be totally unfamiliar. Boogiepop Phantom manages to give viewers an easy, unsettling feeling in the pit their stomachs.  Every moment I found myself anxious as to what might happen the next minute.
Beautifully illustrated and animated, Boogiepop Phantom succeeds on many levels: as a horror story, mystery, thriller and suspense tale.
There's something quaint and charming about old school Anime.  Not quite as sophisticated as today's computer animated that is enhanced and visually sophisticated, older Anime still has its merits.
Sure the characters look a bit dated, the special effects kind of quirky and the animation a little more low-tech, but where most old school Anime lack in razzle and dazzle they make up for it with clever stories, inventive pacing and interesting characters.
Space Adventure Cobra is just such an old style Anime series.
In Space Adventure Cobra The Original TV Series part 2 DVD set, all-around rough and tumble good guy and womanizer Cobra is recruited by Dominique in order to infiltrate the infamous and dangerous Pirate Guild Rug sport.
Using his position as a Rug Ball player Cobra hopes to find out about the Guild's drug ring, escape the training camp and report back to the authorities so they can put an end to the Guild.
A few problems may make that difficult.  The other team members have it out for Cobra and the Guild discovers Cobra's true purpose.  Infuriated at his disruption of their illegal activities the Guild will stop at nothing to enact its revenge on Cobra including hunting him down and killing and destroying everyone and everything he holds dear.
Episodes 16-31 are included on the DVD set from Nozomi Entertainment.
For some good old fashion Anime fun be sure to pick up your copy today and reacquaint yourself with a classic Anime that influenced and set the standard for many of the Anime produced today.
Posted by BAM at 11:28 AM