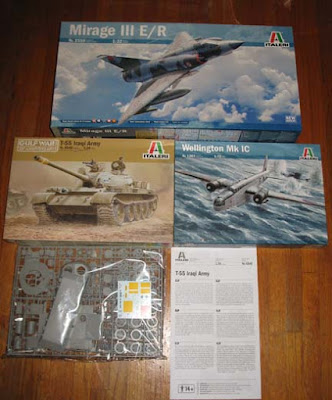 Two if by air, one if by land!

Known for it heavy armor and impressive firepower the T-55 was relatively inexpensive to produce and reliable mainly due to its ease of maintenance.

It was adopted by countries all over the world and is still in use today.

Six decal versions are available along with an easy to understand instruction sheet that offers great advice on assembly, painting and decaling.

Scaled at 1/72 the Vickers Wellington Mk IC twin-engine medium bomber was a mainstay of the British Royal Air Force during WWII.

Its geodesic airframe made the Wellington rough and tough with a high level of flight and battle performance.

Its radial engines delivered up to 1,050 hp enabling it to attain and maintain high-speed flight.
It was capable of carrying a crew of six, along with an impressive bomb and equipment load.  During its WWII run the Wellington was often modified for use in various environments and situations.

The model comes complete on five part trees including landing gear can be assembled in an up or down configuration. With its twin props and cockpits, wide wingspan, front and rear gun emplacements and large cargo area the Wellington is an impressive aircraft model that looks great at rest or in flight configuration.

Throw in its six decal sheets, color instruction sheet and photo-etched fret, along with its seven part trees, and you have a truly outstanding model.

The Dassault Mirage III has been a part of the French Air Force since the 1960s and is an item of pride for the French people.

Reliable and effective as fighter aircraft, the Mirage III has been sold to several countries.
With its characteristic delta wing and turbojet, the Mirage II is capable of impressive speeds and maneuverability.

Several versions have been introduced from a single pilot to twin pilots.

Armament includes missiles and much more.  Reserve tanks come standard, landing gear can be assembled either up or down, and a pilot ladder is included along with a missile loader ramp.

Details are numerous including a complete cockpit with instrumentation, full interior and exterior fuselage details, full wing assembly, hydraulics, communication and radar assemblies and all the bells and whistles the aircraft is famous for.

This is not your novice model-maker kit.  There is a huge collection of parts, precise assembly instructions, several versions  can be created, and with its huge degree of details only the most seasoned veteran model maker will dare to tackle it.


This is true a model-maker’s model!  Once assembled and displayed it is well worth the effort.
Posted by BAM at 6:12 PM