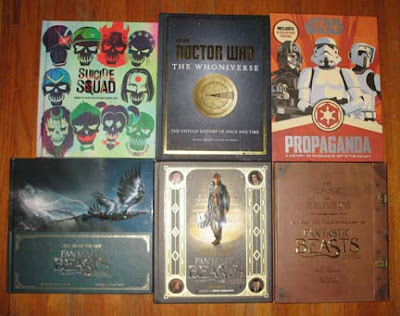 When Harry Potter author J. K. Rowling announced that she would not be writing any more Harry Potter or Harry Potter related books after the last Harry Potter movie and book were seen and written, no one really believed her.


Harry Potter fans knew that she had too much invested in the Potter Universe and (let’s be honest) her bread and butter stemmed from the series.

The ‘no new Harry Potter material’ was soon put to rest when it was announced that a pre-Harry Potter book was being written with a subsequent movie in the works which was recently released.

As expected more Harry Potter material will be showing up soon.

Harry Potter fans were excited (and justifiably so) when the new ‘Fantastic Beasts And Where To Find Them’ movie premiered.

Their long wait was justified as the film continues to draw in crowds and successfully continued the Harry Potter/Hogsworth legacy.

Anyone who knows me can tell you that I am fascinated by the inner workings of movie making.
How a diverse group of people can come together and create movie magic is astounding, especially if a film turns out to be a blockbuster.  ‘Fantastic Beasts And Where To Find Them’ is one such blockbuster film.

Harper Design and author Ian Nathan delve into the magic and hard work that went into making the movie with their ‘Inside The Magic: The Making Of Fantastic Beasts And Where To Find Them’.

Simply by looking at its cover, printed on heavy paper stock with its colorful design and spot varnish character highlights and clever border design, readers can expect an incredible piece of literary work.

The film’s star: Eddie Raymayne provides the opening foreword and with an introduction by David Heyman.

Inside are full-color photos and art of the film’s characters, costume designs, set pieces, location shots, the various prop pieces, behind and in front of camera shots, creature designs, location shots all accompanied by informative text about the making of the film, cast and crew comments and production notes.

Follow along as the film is visualized, brought to life and filmed.  It’s an engrossing examination of the making of a film filled with strange creatures, spectacular visual and practical special effects, massive sets, period costumes and settings and clever props and set pieces.

Just as impressive is ‘The Case Of Beasts: Explore The Film Wizardry Of Fantastic Beasts And Where To Find Them’ hardbound and snap case book written by Mark Salisbury and designed by Mina Lima.

As impressive as the film is this book’s design is just as intriguing and well crafted.
Pop open the secured cover and flip through a few pages and you are immediately struck by its clever design using full-bleed images, full-color photos and tipped in ‘extras’ such as documents and more.

As a graphic designer I have to say I am impressed by the ingenious and outstanding way this book has been put together.

Tipped in pamphlets, recreated newspaper clippings, posters, photo montages, cleverly crafted inserts with recreated documents, black and white and color photos along with graphs, blueprints and other items are complemented by the text in typewriter font that make this book more of a journal both in look and feel.

Relish the details, be enthralled by the inner workings of making the film from special effects and character, set and costume designs and marvel at the ingenuity and outstanding design of this most impressive book.

I could sit literally for hours looking over its pages and appreciate the talent that went behind its design and printing.

Making a movie is one thing, visualizing it before production is another.  As talented as filmmakers are it takes a very special group of talented artists, painters and sculptors to visualize any piece of literary work and translates it to film.

In ‘The Art Of The Film Fantastic Beasts And Where To Find Them’ author Dermot Power provides a visual gallery of the art that was created for the making of the film.

Traditional and computer generated art were both used for the process.  Locations, set pieces, costumes, character designs, creature visualizations are presented in stunning (some as full page) illustrations (both black and white and in color) and 3D maquettes that bring the film alive and set the mood and feel of the film.

As an artist I can appreciate the tremendous amount of work, dedication and talent it takes to pull off such a monumental task.

Each piece of art comes with a brief description of what it is and how it was created.
The book offers a real insider’s look at the creative process and those who possess the imaginations and talent to create an entire world.

It’s no secret that when George Lucas created his Star Wars Saga that the Nazi made the perfect template for the evil Empire.

Both the Nazi and the Empire were ruled by a megalomaniac who used violence and fear to control the population.

The Nazi were notorious for creating propaganda that idealized the Nazi regime, its policies, its leaders and its purpose.

It only makes sense that the Empire would do likewise.

In ‘Star Wars Propaganda: A History OF Persuasive Art In The Galaxy’ both the Republic and Empire are represented in posters, banners and other literature lauding and promoting their causes.

The large hardbound book emblazoned with the Empire and Alliance logos on black comes packaged in a slipcase featuring Stormtroopers on its cover.

Inside includes 10 Collectible Posters, propaganda posters and literature and a whole section dedicated to the freedom fighters of the Alliance.

Both sides of the conflict are represented from their earliest inceptions to events leading up to and during the recent resurgences of the First Order and the New Republic.

Beautifully illustrated and including augmented photo images, the book delves into both the past and present conflicts accompanied by expository text and a listing of the artists who contributed to the various propaganda pieces.

This is a fun book to look through and I really get the feeling as if I am looking at real propaganda pieces much like those produced for WWII that I saw as a kid.

If you have not seen the Suicide Squad movie I urge you to do so.  It is unlike and superhero movie you’ve seen before both is the way it is filmed, its main antagonists and the pacing, music and overall look.

In ‘Suicide Squad behind The Scenes Of The Worst Heroes Ever’ readers are offered a front row seat to the making of this most unusual and totally unique take on superheroes.

Upon looking at the book the first thing that strikes you is the cover image of the Squad members rendered as skulls along with the villains of the film.

Open up the oversize, hardbound book and the visual roller coaster is underway.

Every aspect of making the film is covered in exhaustive detail.  Pre-production, production, post-production are all examined.

Also inserted in the book are special surprises such as tipped in photos, documents, tattoos and much, much more.

It’s like touring a visual carnival.  There is so much to look at and absorb it will literally take hours to look through the entire book-it’s that good.

I loved the full-page photos, cast and crew close-ups, set designs, costume visualizations and every aspect of making the film.

Just like the movie the book is unlike anything you’ve ever seen before-it’s frantic, fast-paced and just plain fun!
George Mann and Justin Richards present ‘Doctor Who The Whoniverse The Untold History Of Space And Time’.

Much has been written about Doctor Who and the Timelords but how did they and the universe they live in come about?

Starting from the early universe the book then delves into its earliest inhabitants and their cultures.

Discover the many types of life that were scattered across the universe. See how the Daleks, the Cybermen, the Time Lords and the various alien factions (both good and bad) came about and why the Time War occurred.

Filled with striking full-color illustrations and paintings the book begins at the dawn of time and travels to the far flung future and the ultimate conclusion and fate of the entire inhabited universe.

Doctor Who fans are sure to enjoy each and every page as they delve into the massive Whoniverse and uncover the hidden (and not so hidden) secrets of all of time and space.

The thickly bound, hard cover book is a ‘ must have’ book for Doctor Who and science fiction fans.