Lightning McQueen and The Mystery Wagon 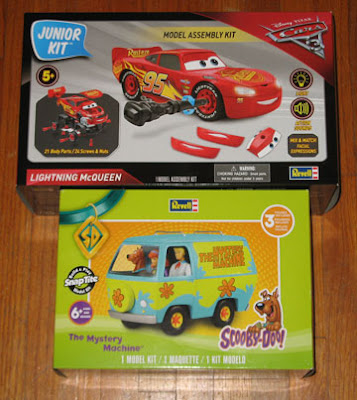 Finally!  A model I can put together without totally screwing it up! 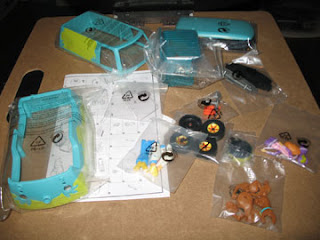 Revell must have heard my pleas and whines of anguish and sent me two model kits that even I can do.

Designated as six years and up skill level the pre-painted, no-glue, snap together Scooby-Doo Mystery Wagon is one sweet model.

In fact if it were food Scooby-Doo and Shaggy would probably eat it.

This exact replica is a perfect match for the famous Mystery Wagon as seen on so many Scooby-Doo adventure animated cartoons.

I can even follow the simple instructions to put it together!

A few snaps, a little decal/sticker application and before you know it you have a full-fledged Mystery Wagon complete with Scooby-Doo, Freddy and Velma articulated figures. 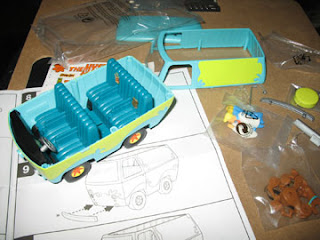 It’s a beauty of a combination and I plan on displaying it with pride in my Man Cave.  Finally, one model that I can call my own, with not goof-ups!  Imagine that!

Complete with 21 body parts,  Lightning goes together using 24 nuts and screws (a screwdriver is included!). 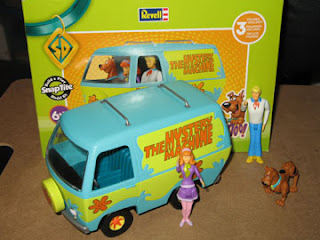 Pre-painted and easy to assemble Lightning is sure to dazzle Cars fans especially after you apply the custom decal/stickers, including the mix and match facial expressions!

Lightning even lights up and makes sounds.  Kids five and up can assemble, disassemble and reassemble Lightning as many times as they want.

Get ready for some high speed modeling fun as only Revell can provide it!
Posted by BAM at 7:18 PM Links to this post

Star Trek was broadcasting only as repeats.  In 1975 audiences were just beginning to pay attention to the Star Trek phenomenon.

TV was a Sci-Fi wasteland.

That’s why in 1975 when the syndicated TV series: Space: 1999 premiered I, along with many other Sci-Fi hungry viewers, jumped on the bandwagon to watch the TV series. 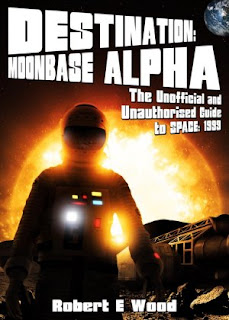 The former Mission: Impossible husband and wife team of Martin Landau and Barbara Bain starred in the series along with an excellent mixed race and nationality supporting cast.

The premise of the story is the Moon gets blasted out of orbit by a nuclear explosion and is flung into space.

The residents of Moonbase Alpha must learn to cope with the dangers of space including encountering friendly and hostile alien races, unexpected space phenomena and more.

The book follows the TV series from its inception to its production and episodes.

Learn all about the challenges of putting the ground-breaking Sci-Fi TV series on the air and the many ups and downs of production, cast choices, budget limitations and more.

All of the cast and crew are listed and many offer their own memories of the series.

Plus there’s a section on the concept for a return of the series.

It’s all present and makes for an engrossing read. 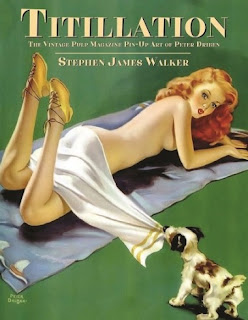 I’m a sucker for ‘good girl’, bad girl’ and ‘cheesecake art’ from the Pulp Magazine era.
One of the all-time great Pin-up artists of the era: Peter Driben was one of the most prolific.

‘Titillation The Vintage Pulp Magazine Pin-Up Art Of Peter Driben’ as written and compiled by Stephen James Walker, is a ‘must-have’ for fans of the Pin-Up fan.

The book is filled with full-color painting reproductions of Dribens’ work.

Beautiful women, dressed in revealing attire and in provocative poses, are shown accompanied by publication dates and listings of the magazines they were featured on.
It’s cheesecake at its best!
Posted by BAM at 3:48 PM Links to this post

For The First Time On Television 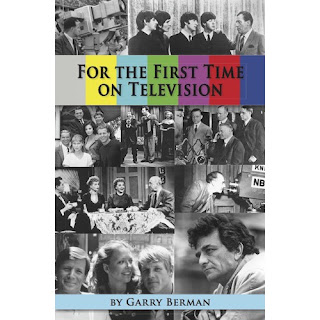 I am of the generation that first saw the advent of TV.  I was born in 1953 and at that time TV was in its infancy.

The movie studios and other popular culture phenomena that had previously enthralled society were feeling the crunch of dwindling audiences that had shifted its attention (and money) to TV.

I was there when many of the ‘firsts’ of TV occurred from the first international broadcast, the first TV Western, Sci-fi, Drama and Comedy TV shows to the first broadcast from outer space.

TV has seen and taken part in hundreds of ‘firsts’ and they are all listed in ‘For The First Time On Television’ by author Garry Berman and published by BearManor Media.

From the first news broadcast, the first cartoon show and so much more the book examines not just what was broadcast on TV but the many firsts TV and broadcasting obtained.

Filled with interesting historical text and spotlighted with black and white photos the book is a fascinating examination of the technology, individuals and shows that changed the face of mass media across the globe. 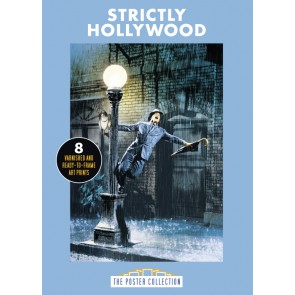 Up until the early 1960s Hollywood produced ‘feel good’ musicals that reflex the particular decade they were produced in.
Carlton Books has released a varnished and ready-to-frame collection of art prints commemorating the great musical of all times.

‘The Poster Collection’ includes eight stunning black and white images from some of the greatest musicals starring such Hollywood luminaries as Gene Kelly, Ginger Rogers, Fred Astaire and others. 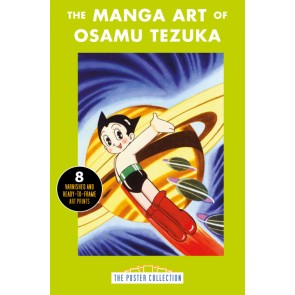 West Side Story, Singin’ In The Rain, High Society, On The Town, The Gay Divorcee, Funny Face, Cabaret and Top Hat are all represented in ‘Strictly Hollywood’ with images from each film.’

‘The Manga Art Of Osamu Tezuka’ showcases the spectacular art of one of Japan’s leading Manga artists.

Each of Tezuka’s famous figures is represented such as Astro Boy, The Three-Eyed One, Jungle Emperor Leo, Metropolis and many more.

Manga/Anime lovers are sure to want this full-color collection of varnished prints to display.

Other themed collections are also available.
Posted by BAM at 7:41 PM Links to this post

The Prisoner, The Avengers and Casino Royale 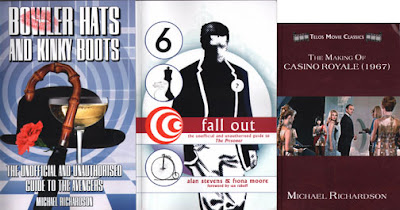 I love British TV series from the 1960s-especially the Spy series.
My two favorites were ‘The Prisoner’ and ‘The Avengers’ with ‘The Avengers’ taking the number one spot.

The Emma Peel and John Steed period was by far my favorite but I enjoyed the series overall.

After the original series was cancelled it was resurrected in the 1970s as ‘The New Avengers’ and in the 1990’s it hit the Silver Screen.

I have an extensive collection of books about ‘The Avengers’ but they pale in comparison to author Michael Richardson’s ‘Bowler Hats And Kinky Boots: The Unofficial And Unauthorized Guide To The Avengers’, published by Telos Publishing Ltd.

It is the most exhaustive and thoroughly researched book about ‘The Avengers’ I have ever encountered.

Everything there is to know about the show is included such as episode guides, behind-the-scenes tidbits, production notes, sequence of original broadcasts, cast and crew bios and so much more.

There are even sections on commercial merchandise tie-ins, the legacy of the show and spin-offs.

There are spy shows and then there is ‘The Prisoner’ what I consider to be an ‘anti-spy’ TV show.

The series star, Patrick McGoohan had just come off his immensely popular ‘Secret Agent’ TV series, as it was known in the United States.

In a brilliant move to bring an end to his popular spy series, McGoohan created ‘The Prisoner’ which although it did not name the key player, was known by fans as the spy in Secret Agent.

When a British spy resigned he is kidnapped and taken to a location known only as ‘The Village’.

While there he is subjected to various forms of mental manipulations in an attempt to learn his secrets.

It is never made clear whether his kidnappers were from the British government or enemy agents.

The series only lasted one season and successfully brought to a conclusion to the saga of the main character.

‘Fall Out: The Unofficial And Unauthorized Guide To The Prisoner’ written by Alan Stevens and Fiona Moore, delves into the enigmatic thriller that changed the face of TV forever.

Learn all about the series from production secrets to cast and crew bios to episode examinations.

Another British creation made a successful transition to movies from popular novels.

James Bond, the suave and deadly British spy premiered on the Silver Screen in the early 1960s.

Due to a copyright snafu the popular series had a lapse where another production company was able to make its own ‘unofficial’ James Bond film based on ‘Casino Royale’.

Made with tongue securely placed its cheek, ‘Casino Royale’ was more farce that a spy-thriller.

Still it is a James Bond film and although lambasted by ‘true’ James Bond fans it does have a place in cinema history.

‘The Making Of Casino Royale (1967)’ by Michael Richardson takes a good hard look at the James Bond spoof.

Cast and crew bios, production notes, missing scenes, production difficulties and how the film was adapted for the screen and other interesting tidbits fill the pages with information about the cult classic.
Posted by BAM at 3:01 PM Links to this post