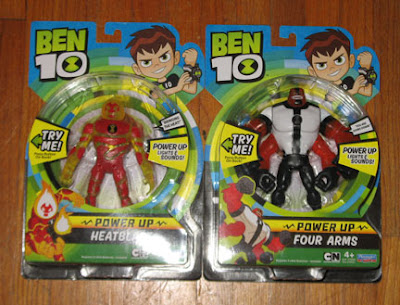 It is remarkable to me and a real testament to a toy line that certain action figures tend to stay around for years.
Ben 10 is one such action figure line of toys.

When Ben finds an alien watch; the Omnitrix, he discovers, to his delight,  that he can change into 10 different aliens.

Once he changes he takes on the characteristics and powers of the alien he chooses.

Ben chooses to be the hero and he’s saved the planet a number of times.  Over the years the selection of aliens has changed but the adventures of Ben is as fun as it gets when you consider he’s a kid and he’s just been handed awesome powers.

Playmates Toys has produced a lot of Ben 10 figures over the years and its newest selection ups the ante with some incredible sound chips producing voices, alien power surges and more.

The new figures not only talk and make noises but they also light up.

Get ready to ‘Power up!’ with latest and greatest Ben 10 action figures yet.

His fire/flame head is accented with a red skull front that lights up whenever he talks.

With four finger hands and two-toe feet the translucent figure is every bit the
hero with alternating fire red patches over his nearly transparent body.


Fully-articulated, Heatblast is a real ‘hot’ toy that is sure to ‘turn up the heat’ against any bad guy.

Watch his head and torso light up with the push of the button on his upper back.

What’s better than two arms?  Why Four Arms of course!

Four Arms is a muscular red, black and white clad alien with massive arms and hands and two-toe feet.

His four eyes and large teeth filled mouth make him look intimidating-which he is!

Fully–articulated, Four Arms can move his legs, arms, torso, head, hands and he lights up as he shouts out some warnings and threats against any adversary.

Both figures are expertly crafted with great sculpts, no slop over or rough edge paint application, are rugged, articulated and look great in their full-figure display bubble packs.

Push their buttons and they talk, hold the buttons down and get ready for some alien energy blasts!  Exclusive at Toys R Us.
Posted by BAM at 7:08 PM