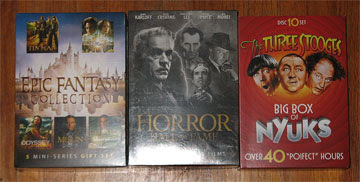 Vincent Price, Boris Karloff, Christopher Lee, Peter Cushing and horror actors and actresses that appeared on movie screen in years past were the best.

Sure there was some blood and gore-but it was at a minimum and was usually seen briefly.
What made classic horror films so good is what they didn’t show.  They left it up to the viewers’ imaginations-now that’s scary!

The ‘Classic Horror Collection’ contains four frightening tales sure to chill your blood. From a nuclear holocaust to maniacs and mad doctors this collection covers the entire horror genre.

The ‘Hammer Film Collection Volume One and Two’ contains the best of the best of the British horror film catalog starring such notables as Christopher Lee and Peter Cushing.

Discover why Hammer Films became the preeminent horror film-making studio in the world for the better part of three decades.

Both Boris Karloff and Vincent Price have their own film collections.  Both actors live up to their reputations as masters of horror.

It’s a bone-chilling joy to watch these masters of murder, mayhem and deeds most foul perform their cinematic classics.

Fantasy films have always been popular-more so even today.

The Wizard of Oz gets set on its literary ear with ‘Tin Man’ a modern retelling of the classic tale.
Fantasy, imagination and worlds of adventure await in ‘The Tenth Kingdom’ where nothing is impossible.

‘The Odyssey’ is a classic Greek tale of one man’s quest to save his kingdom, his family and himself.  Join Odysseus as he journeys home to his kingdom while he search for treasures and riches far more precious than gold.


Where would King Arthur and his Knights of the Round Table be without ‘Merlin’?
Sam Neill plays the crafty and clever wizard in a tale of Old Magic versus New Magic.  Which will he choose?

‘Gulliver’s Travel’s was one of my all-time favorite books growing up.  I loved the original film and animated feature.  And the new version starring Ted Danson is a worthy heir to the story.

Travel with Gulliver as he encounters some of the most wondrous and dangerous friends and foes imaginable.

When I was younger I used to rush home from school to catch the after school showing of the classic Three Stooges film shorts.  Curley was my favorite but I soon came to love ALL of the Three Stooges and their wacky, clap-in-the-face adventures.

The Three Stooges' roster changed over the years but their humor was timeless.

Included in the10-Disc Set are classic shorts, cartoons, all of the Stooges’ films, a special featurette by Moe’s son, a slideshow, TV appearances and much more.