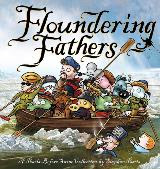 I’m proud to be an American.  I’m also proud of our heritage and of our founding fathers.

But, they would be turning over in their graves if they caught a glimpse of the cartoon cast of A Pearl Before Swine’s in the Floundering Fathers book from Andrews McMeel Publishing.

Get ready for a history lesson like none you’ve seen before as Rat, Pig, Zebra, Croc and a host of other wacky and wild humans and animals set history on its collective ear.

Here are just a few things you can expect: coupons you can really use, subjects that generate the most complaints, tennis, social cues, a clown congressman, illegal immigrants, a Tapas Bar, Rat President, neighbors and much more.

Nothing or no one is sacred.  Think of it as an equal opportunity insults.

Whatever you care to name it Floundering Fathers is downright hilarious and so fun of puns and clever one-liners that the comedy union had to put a stop to it.
Posted by BAM at 2:48 PM