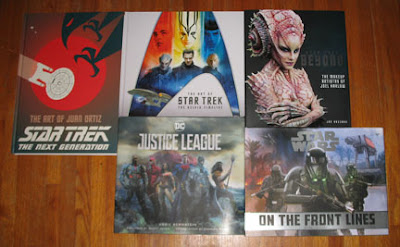 Titan Books takes you to the stars and introduces you to the ‘World’s Greatest Heroes’ with five, oversize, new books that will blow your mind!

The books’ print quality is amazing with bright, vivid colors printed on heavy paper stock all wrapped up in heavy-duty, paper stock covers complete with slipcases.

Daniel Wallace’s Star Wars On The Front Lines examines the violent conflicts between good and evil in the Star Wars Universe.

Each and every major battle portrayed in the entire Star Wars Movie Universe is gone over in great details.

Full color illustrations and paintings capture key moments in each battle and personnel, weapons, transports and land, air, water and spec vehicles used in each.

For a real insider look at the wars and battles that shaped the Empire, Rebellion and other factions and civilizations across the galaxy this book fills in the gaps.

The awful, violent and destructive results of war are shown with no apologies.

It’s a part of the Star Wars Universe that tends to be glossed over.  We tend to forget that it is called Star ‘Wars’.

DC Comics and Warner Bros. celebrated a big hit with their Justice League movie.  Audiences loved it and DC Comic Book readers were thrilled to see their favorite heroes on the Silver Screen.

Writer Abbie Bernstein celebrates the event with Justice League The Art Of The Film, the new book from Titan Books.

This is one gorgeous book that takes readers on a visual tour of the making of the film starting with pre-production art, conceptual paintings, costume, set and vehicle designs, tech visualizations, character uniforms and special effects.

The art is complemented with photos from the film, close-up examinations of set and costume designs and plethora of images that spotlight the massive effort that went into bringing the DC Universe to film.

It a stunning visual treat that also includes lots of production notes, recollections and a very special foreword and introduction.

Titan Books presents a trio of Star Trek books from the original universe and the Kelvin Timeline.

Ortiz is back and this time he’s providing his own unique artistic vision of classic Star Trek The Next Generation episodes.

The Art Of Juan Ortiz Star Trek The Next Generation contains an amazing compilation of original art create to showcases episodes from the series.

Besides the oversize page images (more poster art than illustrations) the book also contains notes, sketches and a Q & A from the artist.

As a designer myself, Ortiz’s art fascinates me with its scope, clever designs and carefully juxtaposed images.

Back in 2009 Paramount Pictures (owners of the Star Trek franchise) and director J. J. Abrams set out to update the Star Trek Universe for a whole new generation of movie goers.

The results was a retelling and revamp of Star Trek by using a clever alternate timeline that presented Star Trek, its characters and settings with a refreshing new twist.

The Starship Enterprise has also gotten a facelift with a sleek new design that pays homage to the original design.

Starfleet, the Klingon, the Romulans and dozens of other species have been given a facelift.

For a mesmerizing tour through the new Kelvin Timeline Star Trek Universe this book delivers.

Part of the Star Trek Beyond movie’s success was its expansive use of alien species.

While the previous two Star Trek movies had aliens they were not as prevalent as in Star Trek Beyond.

That all changed with Star Trek Beyond primarily because of makeup artist Joel Harlow.

In Star Trek Beyond The Makeup Artistry Of Joel Harlow by Joe Nazzard, the genius of Harlow is on full display.

There are aliens, then there are Joel Harlow aliens.

What’s truly amazing about his designs and technique is that the aliens look like aliens.

Gone is the aliens who looks like a humans with extra parts and funny noses or foreheads.

Harlow’s aliens are almost shocking by their appearances.  It’s hard to believe that people actually wore the makeup and prosthetics.  While most are humanoid they definitely are not human by any stretch of the imagination.

Bones protrude, appendages bend and extend at odd angles from joints, noses, eyes, facial bone structure all have changed and yet through the mastery of color, texturing, flexibility and precise attention to details the creations look real.

They appear as if they could actually exist.

Full color art and photos show each alien design. Sketches, computer concept art and transitional photos all combine to offer a unique creature sneak peek into the mind of a truly remarkable makeup artist.
Posted by BAM at 4:53 PM