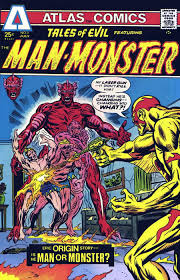 Back in the mid-1970s Marvel Comics former owner, Martin Goodman, decided to get back into comic books and compete with his former company.

Goodman had always been a wheeler dealer and over the decades developed the uncanny knack for taking chances and cashing in on current crazes.

After having sold Marvel Comics he realized that Marvel Comics growing popularity also meant that lots of cash could be made from merchandizing, etc.

Never one to let an opportunity pass him but he decided to start his own comic book company dubbed Atlas Comics.  An interesting note is that Marvel Comics original name was atlas Comics.

Goodman decided to go head-to-head with Marvel Comics even going so far as to hire many of its current and former artists and writers, offer a higher page rate and attempt to copy Marvel Comics look and style.

Unfortunately Atlas Comics was doomed from the start.

Artists and writers were not being paid on time and many of the company’s titles were poor imitations of Marvel Comics ideas and characters.

Although the company only published for a year before closing its doors it did manage to publish a few gems.

One of my favorites was Tales Of Evil Featuring Man-Monster #3 that introduced the origin of Man-Monster as created by Gary Friedrich, Tony Isabella and Rich Buckler.

The story centers around rich playboy and former Olympic swimming champion Paul Sanders who in a show of macho to impress two female reporters swims into a strange ocean phenomenon that transforms him into the Man-Monster.

A Bog Beast story was also included in the anthology.

Both series had promise but unfortunately no one will ever know what either series had in store.

Although Atlas Comics no longer exists fans of comic books are starting to take notice of the titles published and a strong cult following has developed.
Posted by BAM at 11:56 AM