It was not an easy decision, but I did it--www.bamcc.net is no more.  That's right, I discontinued my website.  I have my reasons.

Over the past several months I've noticed that the Internet is slowly and methodically being taken over by retail, wholesale, storefront, manufacturer and publisher websites-all of which are attempting to sell their products.

And that's good.  It's good because a company-any company-can only survive if it sells its product or service.

More and more commentaries, research and review sites and the like are slowly getting pushed off websites and are shifting to blogs, Facebook and other forms of social media.

Computers are no longer the sole proprietors of the Internet.  Cellphones, tablets and other devices ply the Web just as easily, and sometimes faster, than desktop or laptop computers.

My website was getting lost in the shuffle.  And another curious thing--my blog traffic was slowly overtaking my website traffic.

I may not be the brightest bulb in the pack but it doesn't take a sledgehammer to my head to convince me that I need to change my review strategy.

So, after much deliberation, soul-searching and nail-biting I decided to bite the bullet and ditch my website.

It wasn't easy-it had been like a child of mine for a long time.  Separation was difficult and anxiety set in.

Nonetheless my website is now history and I'm anxious to move on with my blog-for a lot of reasons.

One: I'm longer have to dedicate one computer to store my website files on in order to FTP my files to an outside server.

Two: My blog archives ALL of my past reviews-literally hundreds of them.  Categories are easily accessible to anyone--by type and year and month posted.

Three: I still can post a boatload of photos, make text hyperlinks and label each review in a certain category.

Four: I can change the blog's look: design, color and text any time I choose.

Five: Demographic tracking is a breeze.  I not only can track my traffic numbers but where the traffic is coming from and through what web search machines.  This allows me to see what reviews are the most popular and where I need to more more effort into.

Six: I can join blog communities, write commentaries and generate more viewers through online ads, discussion groups and so forth.

I've also started a Facebook page that lets me hyperlink my blog review so I have even more traffic.

Conclusion:  It's a sure fire winner!  How can I loose?  I get more traffic, flexibility, archiving, viewer interaction and feedback.

I am excited what the future holds in store for Boyce McClain's Collectors' Corner.
Posted by BAM at 1:06 PM Links to this post 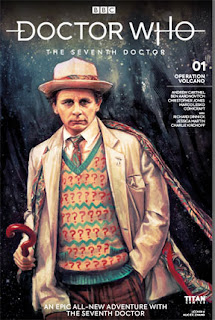 In my opinion the Seventh Doctor Who does not get the respect and credit he is due.
He is witty, intelligent, honorable, loyal, brave, determined, unpredictable, formidable and to top it all off, he’s a dapper dresser-even though he is quirky.

Many Doctor Who fans tend to look over the Seventh Doctor and prefer the later versions.

While, in fact, if it were not for the Seventh Doctor,  many of the traits and characteristics of the Doctors that followed him would not exist-the result being the later Doctor Who’s personas would be radically different.

Show the man some respect!

Titan Comics gives the Doctor his due with a brand new comic book series beginning with Doctor Who The Seventh Doctor: Operation Volcano #01.

The year is 1967. The place: the Australian desert.  Doctor Who and his companion Ace, along with several other individuals, are gathered around a campfire.

Ace is determined to go through with something-the Doctor agrees.

Switch to the year 2029. An Earth spaceship comes across an alien spacecraft circling the Earth-undetected by any conventional scanning devices.

One of the astronauts enters the spacecraft only to discover an Earthman, with long hair and beard, suspended in midair with what appears to be strands of biological webbing.

The astronaut approaches and the man awakens declaring himself to be Group Captain Gilmore.

Back in Oxford Group Captain Gilmore meets up with the Doctor and Ace who agree to join forces with the explorers to examine a strange craft that appeared out of nowhere.

Then things get really interesting…..

I love it-what a perfect Doctor who tale!  Just like the TV series, it keeps me guessing and wanting more.
The writing and art are spot-on and the coloring is well-balanced and does not detract from the story.  It augments it.

For a Doctor Who story worthy of the TV show be sure to check out this new comic book series-you won’t be disappointed.

Break Away Ballz and Do Dats 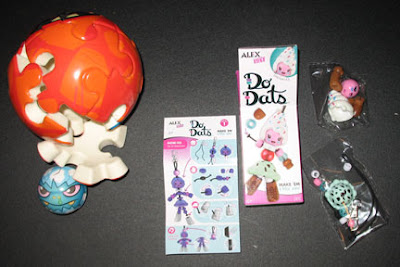 What’s 5 inches, round, made of foam, is a puzzle, hollow, has a surprise inside, is ugly
inside and out and bounces?

If you guessed Alex Brands’ Break Away Ballz you’re right! 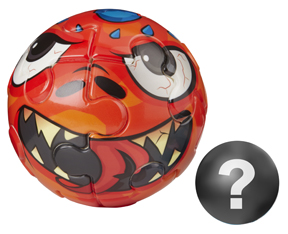 What’s 5 inches, round, made of foam, is a puzzle, hollow, has a surprise inside, is ugly inside and out and bounces?


If you guessed Alex Brands’ Break Away Ballz you’re right!

Don’t get too close!  He might break apart and reveal an equally as ugly mini-Ballz inside!

Uh oh!  Too late!  A bouncy, blue, frozen mischief-maker has managed to escape!

Grab him before he gets away and put him back into Zombiesaurus Rex!

What a neat toy!  Not only do kids get a bouncy puzzle ball but an equally ugly min-Ballz inside.  There’s no telling what Ballz kids will find inside.

Even better, kids can hide their own stuff inside the puzzle Ballz. 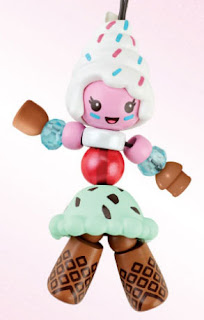 Just as much fun are Alex Brands’ Do Dats.

Simply snap, pop and put together the parts-they’re interchangeable!

Sprinkles is an adorable ice cream pinkie with sprinkles in her ice cream hair, a cute cone dress, high-top brown boots and lots of breads, bobbles and extras to make her the perfect keychain, decoration and mini-doll!

“Always eat dessert first!”
Posted by BAM at 4:43 PM Links to this post 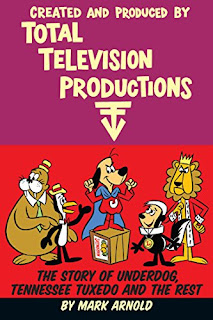 But, did you know that there was another animation studio, although not as well known, that turned out some of the most iconic animated TV shows during that era?

Author Mark Arnold and BearManor Media present: Created And Produced By Total Television Productions-The Story Of Underdog, Tennessee Tuxedo And The Rest, is a wonderful and fascinating book about a much unappreciated animation studio.

Inside readers learn about the history of TTP, its creative staff, the many series it produced and to top it all off rare photos and art are included.

A complete checklist of each series episodes is also included along with story descriptions.  There’s a who’s who section and a lowdown on the many comic book and book tie-ins.

The book contains everything there is to know about TTV told in such a manner as to bring back pleasant memories.