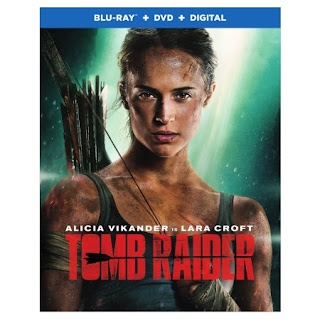 She’s back!  Actress Alicia Vikander breathes new life into everyone’s favorite female adventurer: Lara Croft: Tomb Raider, in a brand new movie from Warner Bros.
The Blu-ray/DVD/Digital Combo Pack piles on the action and intrigue as Lara’s early life is explored where she transforms into the legendary video game heroine.  This is her origin story.

Spoiled, aloft, fiercely-independent, self-centered and not at all interested in carrying on the Croft legacy, Lara refuses to believe her father is gone.

For seven years she refuses to take on her responsibilities and move on.

After discovering several cryptic clues left to her by her father, Lara sets out to discover the truth behind her father’s mysterious death, despite his wishes.

Tracing his last whereabouts to a mysterious island Lara suddenly finds herself waist-deep in peril.

It will take every ounce of her fierce-determination, physical prowess, wits and will to live in order to solve the mystery and come out alive.

The movie is dazzling in its scope, with perils around every corner, spectacular visual and physical effects, hair-raising death traps that would even make Indiana Jones think twice.

Tomb Raider is like watching the video game come to life on the big screen with non-stop action, spectacular vistas and death-defying escapes.

Extras include four spectacular featurettes about the making of the film and the Tomb Raider franchise
Posted by BAM at 3:49 PM