Aquaman Rage Of Atlantis and The Death Of Superman

It’s double the superhero action this month as Warner Bros. presents a duo of super heroic Blu-Ray/DVD movies DC Comics fans are sure to love. 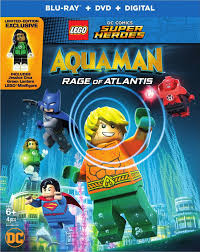 In anticipation of his live-action, big screen premiere later this year Aquaman gets his very own Blu-ray/DVD/Digital Combo release with the LEGO DC Comics Superheroes Aquaman Rage Of Atlantis full length animated movie.

Aquaman is joined by his Justice League companions: Batman, Superman, Wonder Woman and Green Lantern, along with his beloved wife Queen Mera, as they combine their might to take on a deadly extraterrestrial threat to Earth.

Area 52: Dread Lake is the first stage of a diabolical plan by the Red Lanterns and several other DC bad guys to take over the surface world.  It’s up to the Justice League, Aquaman and a plethora of DC superheroes to take up the challenge and save the world.

Aquaman Rage Of Atlantis packs in the action and throws in some LEGO humor with the end result being a thrill-a-minute ride and laugh until your ribs hurt DC Superheroes adventure.

Is Aquaman up for the job after being humiliated by Lobo and his evil half-brother Orm: The Ocean Master?  Will Atlantis help the surface world?  Will Aquaman regain the respect of his subjects and that of his fellow superheroes? 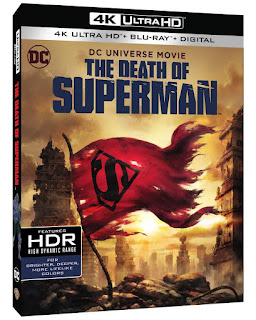 For a more serious note be sure to check out the new 4K UltraHD/Blu-ray/Digital full-length animated movie release of the DC Universe Movie the Death of Superman.

Longtime DC Comic Book readers remember the devastating events back in the mid-1990s that led to the death of Superman by Doomsday.

While the film takes certain liberties with the original comic book epic the story basically remains the same.

In this version an asteroid crash lands on Earth.  Encased within is the ultimate killing machine: Doomsday.

The unstoppable rage of the creature threatens Metropolis so Superman jumps into the fray.  Batman and the other Justice League members recognize the creature’s ultimate threat so they join in the fight to save Metropolis and ultimately the world.

Included with the Combo Pack is a featurette about the classic clash, two classic DC bonus cartoons and a sneak peek at an upcoming DC Comics animated movie.
Posted by BAM at 4:22 PM Links to this post 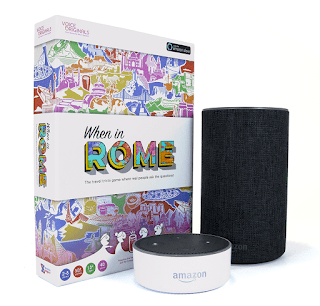 We’re all familiar with board games.  They usually involve a board, game pieces, dice and sometimes fake money.  They can be fun at first but after a while they can get a bit tedious and boring.
They need something to liven them up-to make them more interactive.

Sensible Object/Voice Originals has the answer.  Introducing a game that talks to you, ask questions, guides you, keeps track of your progress, offers help and even plays music and sound effects!

When In Rome incorporates cutting-edge technology.  All you need is a smart speaker and before you can pack your bags you’re taking a trip around the world.

It’s like a board game and computer game combined, without a cumbersome screen and CPU.

Here’s how to play:

Assuming you have Alexa (other smart speakers may also be used) ask her to start When In Rome.

There are two teams: red and blue-usually two to four players.  Each team chooses the city they wish to start in.

Who starts the game is determined by who answers correctly a question about one of the cities on the board.

Alternating turns, players travel to different locations on the board and answering question from locals.

Get the correct answer and players choose to take points or pick up an Upgrade Card. 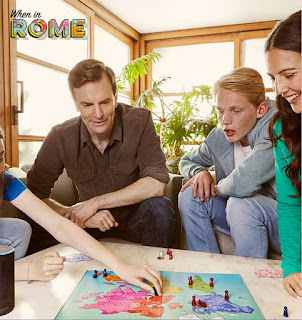 Answering the questions correctly helps your team make friends who guide you along in the game.

As you play Alexa will notify players of souvenirs.  The team who goes to a souvenir location and answers the question correctly gets the souvenir to gain bonus points.

Upgrade Cards can either help or hinder-use them wisely!

The game ends when the third souvenir is collected or after nine rounds.

Whoever has the most points at the end of the game wins!

Once you play When In Rome you’ll never go back to regular board games.

When In Rome includes: 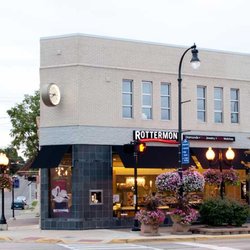 It was Thursday.  I’d just gotten out of high school, finished my paper route and was heading home, where I lived on Union Street, which paralleled Main Street in Milford, Michigan.
I pulled my bike up to Foster’s Rexall Drug Store on the corner of E. Commerce and Main Street (where Rottermond Jewelers now resides) entered the front door and said hi to Mr. Foster who was behind the prescription counter.

“Hi Boyce”, he said.  “The new comic books just came in a little over an hour ago and I just put them on the magazine rack.”

“Thanks,” I replied and made my way to the back of the store to check out the latest releases.
I picked up a Lee/Kirby Fantastic Four, an Amazing Spider-Man, The Avengers and a few other titles-eight in total.

I took them up front, paid my 96 cents + tax and headed home to spend a few hours enjoying my new acquisitions. 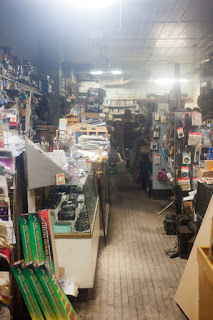 But before going home I made one more stop at The Shutter Shop where the owner: John Doliber, faithfully guarded the front entryway.

“Hi Boyce.  Come on in, I just got a new batch of old comic books you’ve got to see.”

Mr. Doliber was a huge comic book fan.  Almost the entire basement of his store was filled with comic books stacked six feet high.  None were bagged or boarded.  That was to come a few years later.

He loved Golden Age comic books while my taste was mostly for Silver Age.  He'd break out his latest finds and let me look at them.  I can’t recall how many classic comic books I looked at.  I held a veritable fortune in my hands.  Back then ‘hot’ comic books could be bought for practically cover price.

Did Mr. Doliber know something the rest of the comic book loving community didn’t?

Looking back I’m sure his collection today would be worth millions of dollars.  Who knew?

After looking at a few early Fantastic Four, Daredevil, Superman and other assorted Silver Age classics I headed home, only to repeat the cycle again the next week.

This went on for several years, right up to the time jack Kirby left Marvel Comics and produced his famous Fourth World series of titles for DC Comics.

After a couple more years I abandoned comic books (I was too old for that kids stuff), discovered girls and cars, graduated from high school and started college.

A couple years after that I moved south to live on my own, dabbled in a comic books for a short time, abandoned them, finished up college, met my wife and moved to Texas for an illustrator job.

While there the comic book bug struck again when I came across some John Byrne X-Men and Frank Miller Daredevil.  I’ve been hooked ever since and I’ve managed to collect a respectable number of classic comics.

I’m still looking for old comic books, but my budget is limited (more like non-existent) and my taste in comic books is strictly limited to Silver and Bronze Age.

Like all serious comic book collectors and lovers I know that somewhere-out there-is a box of old comic books with my name on it.  I’ve been waiting a long time-perhaps tomorrow!
Posted by BAM at 1:48 PM Links to this post 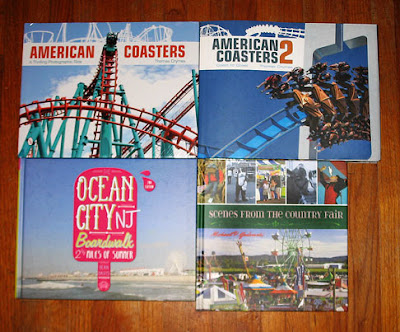 Many years ago, growing up in Michigan, one of my favorite things to do in the summer was to go with my family to the Walled Lake Amusement Park.

Like most small amusement parks of the time it had its standard fare of rides and attractions: The Hall Of Mirrors, The Spook House, The Merry-Go-Round, etc.

By far my favorite was the old, wooden roller coaster.  It creaked, shook, made strange noises and rattled my bones- I loved every minute!

Author Thomas Crymes and Schiffer Books also love roller coasters and to prove it they have released the book: American Coasters: A Thrilling Photographic Ride.

This deluxe hardbound book offers an up-close-and-personal look at some the greatest roller coaster rides from all over America.

Brilliant full-color photos capture the thrill of riding all sorts of roller coasters, from old rickety wooden coasters to the more modern steel, death-defying loops-the-loop monstrosities that challenge gravity itself.

Regardless of the type of roller coaster you enjoy, this book covers them all with luscious in-your-face and up-close color photos accompanied by captions and interesting text.

It seems that Thomas Crymes can’t get enough of roller coasters so he came out with a second book about them with American Coasters 2: Coast To Coast.

Inside are even more thrill-a-minute roller coaster photos taken from different angles and perspectives, ranging from front seats, spectator to passenger shots.

It’s a thrill ride like no other as you get to experience the joy, chills and pure take-your-breath-away action.

For a different type of summer and holiday bundle of thrills and fun times author Dean Davis invites readers to tag along as he explores Ocean City NJ Boardwalk 2½ Miles of Summer 2nd Edition.

Beside thrill rides the boardwalk also includes arcades, restaurants, fishing, boat and recreational rides, an ocean beach, a water park, miniature golf, food, treats, refreshments and everything else anyone could ever want to enjoy the days of summer.

Full-color photos spotlight all of the attractions and eateries accompanied by text recounting the history of each facility along with some other interesting facts.

Country Fairs are big in the South.  My family and I have attended our fair share and enjoy the hometown festivities, food and fellowship.

In Michael P. Gadomski’s Scenes From The Country Fair readers get to experience what hometown America is all about.

Live stock and cooking exhibitions and competitions, demolition derbies, midways, carnival foods, funky sideshows, thrill rides and all the other trappings and temptations associated with Country Fairs are represented so readers can experience them all via the full-color photos.

Photo captions explain each action or event.  What a wonderful way to experience hometown America with all of its variety of crafts, foods, activates and especially its people.

This is America at its finest not encumbered by the political and social issues of the day.  It’s life for the moment as enjoyed by family and friends.
Posted by BAM at 2:31 PM Links to this post