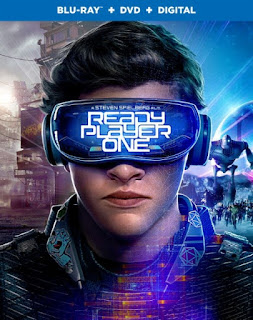 Count your quarters, fire up your game console and boot up your computer!
It’s time to play the ultimate, virtual reality video game where the stakes mean the final fate of the virtual world of OASIS.

Brilliant game designer James Halliday created the ultimate video game OASIS, to entertain and offer an escape to the down-trodden inhabitants of the harsh world of 2045.

In OASIS players can go anywhere, be anyone and do anything in a totally immersive game that lets them exist and feel as if they are in real life.

Wade Watts is hooked on OASIS-his only viable escape from his horrible living conditions.

He, and thousands of other OASIS players, strive to win a three-part contest so that they might inherit James Halliday’s fortune and the total control of OASIS.

Can Wade and his band of video game resistant players save OASIS?

There’s a hitch. Some nasty, competitor corporate types want to control OASIS and they will do anything to stop them from winning.

The Warner Bros.’ Ready Player One Blu-ray/DVD/Digital Combo Pack also includes some awesome extras such several featurettes about the making of the film and so much more.