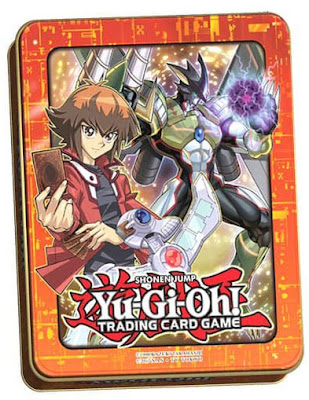 It’s that time again.  Every year Konami releases a Yu-Gi-Oh! Trading Card Game Mega-Tin containing all sorts of gaming goodies.
It’s Mega fun and Mega exciting!  Just look at what you get!

Ever get the hankerin’ for a good old American grilled hamburger or cheeseburger with fries and a soft drink?
In the mood for some company?  Or how about an impromptu medley of songs from a burger joints' family?  A little strange?  Perhaps.

But then again nobody ever claimed that the owners and patrons of Bob’s Burgers are normal.

If you like your burgers flipped on the strange and humorous side then be sure to check out Universe’s two new Bob’s Burgers book releases.

Need a place where you can reflect on your thoughts, get some friendly advice and words of wisdom and satisfy your craving for humor with a slight deep-fried flavor?

Then The Official Bob’s Burgers Guided Journal is just what you ordered.

The gang behind Bob’s Burgers gives you all that and more in this most unusual journal flavored with today’s special.

Stick around! If you thought the journal was great then get a load of The Official Bob’s Burgers Sticker Book starring all of your favorite Bob’s Burgers’ characters, menu goodies and ‘unusual’ paraphernalia familiar to all those who love Bob’s Burgers.

Sorry, you’re stuck with it!
Posted by BAM at 2:10 PM Links to this post

Code Your Own Adventure 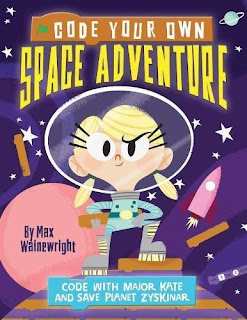 As long as I was a working graphic design professional I never got used to computer coding.  HTML was way above my brain capabilities.  Looking at and crating page after page of coding tested my patience, strained my brain and (quite frankly) bored me to tears.
If only coding was easier and more fun.

QED Publishing and Max Wainewright have published a wonderful new book that teaches kids how to code their very own missions from Space to Pirates, Jungle and Knight adventures.

Using easy to understand instructions (even an adult can understand them) and colorful graphics the book leads readers through step-by-step on and about adding text, graphics, choosing colors and much more.
You can choose your mission and get ready to score!

The book may be written for kids, but this adult plans to learn a few tricks about coding and have fun in the process.
Posted by BAM at 3:30 PM Links to this post 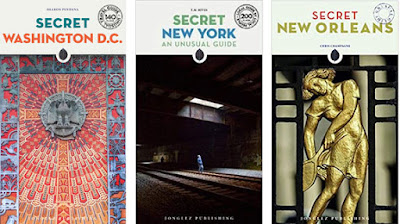 Everyone should visit these three cities in the United States at least once: New York, Washington D.C. and New Orleans
But whatever you do don’t get caught in the same old trap of visiting just the obvious tourist attractions.

Oh sure, they have their place and they should be visited, but there are so many more things to see in each city.

New York has the Stature of Liberty and Empire State Building but it also some unusual locations such an Indian Burial Ground, a statue of Lenin, a hidden subway tunnel, a red lighthouse and literally hundreds of other off the wall attractions.

Each and every one can be found in Jonglez Publishing’s book: Secret New York An Unusual Guide, by T.M. Rives.

Photos, street maps, and more are complemented with fascinating, fact-filled and fun facts and historical text.

Secret Washington D.C. by Sharon Pendana explores 140 locations about the city from the traditional museums and monuments and so much more.  Explore the hidden gems, tucked away points of interest and unusual sights complete with photos and informative text.

Think of New Orleans and the Mardi Gras is usually the first thing that comes to mind.

But, the city situated below sea level has plenty of historical and contemporary attractions, fun activities, classic restaurants and some truly weird and wonderful stuff to explore and experience.

Secret New Orleans by Chris Champagne has the scoop on them all along with lots of photos and fun facts.

Take a chance, explore parts of American the typical tourist passes by and misses.  You won’t be sorry.
Posted by BAM at 3:18 PM Links to this post

It Must Be Art! 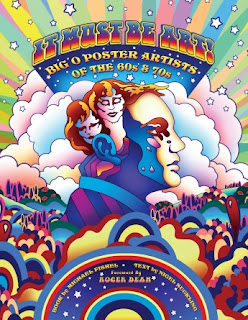 The 1960s and 1970s were a time of change.  The Civil Rights Movement, Psychedelic music and drugs, Woodstock, Country Rock, Singer-Songwriters, The Vietnam War, and Glitter Rock,-the list goes on and on.
Much of the 60s and 70s are reflected in the art and posters created at the time and no other studio represented the era better than Big O and Oz magazine.

Big O artists pushed the boundaries of weirdness and design.  Their poster art redefined the medium.

Full of color, photo montages, quirky art and often disturbing images the Big O gallery of posters set the standard by which posters had to reach in during that turbulent two decades.

Michael Fishel and Nigel Suckling, along with publisher Schiffer Books, present the definitive hardbound book about the art and artists of the Big O: It Must Be Art! Big O Poster Artists Of The 60s And 70s.

Yes artist Roger Dean provides the foreword to this book brimming with colorful art complemented by interviews and short biographies of the artists of Big O.

For a nostalgic look at fascinating era of time where ingenuity, creativity and non-conformity propelled a small art and publishing studio into the spotlight, be sure to pick up a copy of this book.

The 1960 and 1970s were the periods I grew from a teenager to a young man. I have many fond memories of that time and flipping through the pages of It Must Be Art! Big O Poster Artists Of The 60s And 70s, the past came alive for me and it was just as I remembered it—weird dude!  Far out!
Posted by BAM at 1:24 PM Links to this post