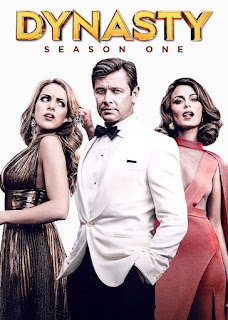 They‘re back!  The uber-rich and powerful, high-society, skeletons in their closets Harringtons and Colbys are back in a brand new take on the Dynasty TV show popular in the 1980s.

All the stab-you-in-the-back, lies, manipulations and bed-hopping are kicked up a notch in 22 full episodes in the Dynasty Season One DVD Collection from CBS/Paramount Home Entertainment.

There are even a few extra features thrown in for good measure such as deleted scenes and a gag reel.

If you loved the original Dynasty series you’re sure to get a guilty pleasure out of watching the 21st Century version of two families plagued by jealousy, envy, wealth, wickedness, family squabbles, business underhand dealings and ever vice and lust known to man.

When Fallon Carrington sets her sights on being the new CEO of the Blake Carrington Empire she is in a store for a nasty surprise when she discovers her father has remarried to Cristal, who is principled, driven, publicity savvy and truly loves Blake Barrington and is almost the same age as Fallon.

Get ready for a battle royal of wits, manipulations and in-your-face confrontations.

Dynasty: you wouldn’t want it any other way.
Posted by BAM at 11:57 AM