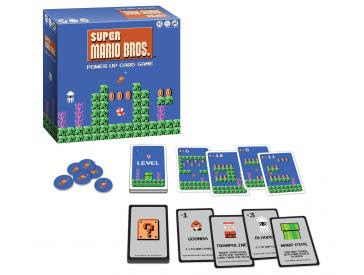 What features two Italian brothers who are plumbers, lots of pipes and tubes, water, a princess, mushrooms, walking time bombs, squids, killer fish, all sorts of weird creatures and deadly traps and danger lurking around every corner and in dark watery places?
If you said Super Mario Bros., you’d be right.  If you are thinking of the video game, you’d be wrong.

USAopoly has squeezed, compressed and printed Mario and his wild cast of characters and game environments into a fast-paced card game that is every bit as challenging as the video game.

The Super Mario Bros. Power Up Card Game: Underwater Edition, from USAopoly, forces players to use their wits and logic (with a little bit of luck and swimming skills) to survive in the dangerous and often deceptive Warp Zone leading to an underwater world.

Trade or keep Level Cards, collect as many Extra Life Tokens as you can or you may lose an extra life.

“?Block” Cards gain an advantage and you may wind up with most extra lives at the end of the game and win.

How does that ‘float’ your boat? 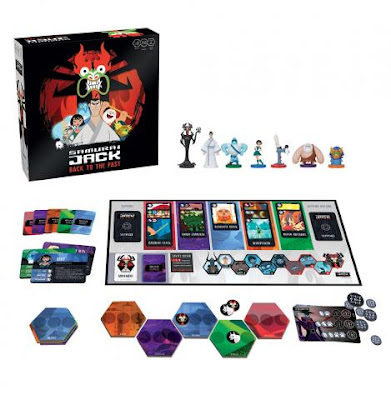 Samurai Jack Back To The Past pits Jack against the shape-shifting Master of Darkness Aku.  (Don’t you just hate that guy?)

Players help Jack by trying to gain the most Honor so Jack can gather Allies, assemble a plethora of Weapons and gain essential Traits.

Whoever manages to obtain the most Honor Cards and get Jack back to the past and undo the future, wins.

This is really nicely designed game from the Board to the Cards and especially the Figures.  As a graphic designer I am impressed by the amount of thought and design that went into each facet of the game.  It’s colorful, clever and really draws you into the entire scenario.