Playing Back The 80s 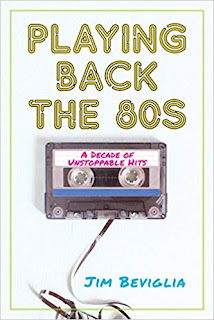 In the music world the decades of the 1950s, 1960s and 1970s saw huge changes in the music industry across the board.
The birth of Rock and Roll, Heavy Metal, Disco, Country Rock and more are attributed to these decades-the list goes on and on.

The 1980s are often over looked as to its importance when it comes to music, which to me is a great disservice.

The 1980s saw a huge upswing in Rap, Soul, Rock and Roll, Country and all other genres of music.

The decade introduced the music video via MTV and witnessed across the board hits that garnished awards from not only their designated music genre but other music types. Case in point: Michael Jackson’s various hits that appealed to Rock and Roll, Rap, Motown, Soul and other types of music.

In Playing Back The 80s author Jim Beviglia and The Rowman & Littlefield Publishing Group examine the music of the 1980s in depth.

Dubbed ‘A Decade Of Unstoppable Hits’ the 1980s not only expanded existing music genres and technical achievement- it introduced even more.

The book features interviews with many of the singers, musicians and production staff behind the mega-hits of the 1980s.

Along with the interviews, the author provides a thorough examination of what occurred to make the decade so pivotal.

Music fans of all genres will want to read this fascinating book about the evolution of music in the 1980s.
Posted by BAM at 3:27 PM