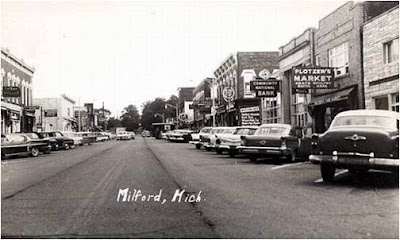 I was born at Pontiac General Hospital in January of 1953.  My Mom and Dad were divorced.  I was the fifth of five boys.  Three were half-brothers (Richard, Dallas and Jim), my full sibling (Elmer) had died at childbirth four years previously.


Mom took me home to Milford, Michigan and a few times a week my Dad would visit.  I only remember his large hands and the coins he liked to jangle and the candy he brought me.
Dad had his demons, one of which was liquor.  Sober he was a saint, drunk he was a devil.

He was an alcoholic and at the young age of 44, when drunk, he stumbled against a broken wire fence, pierced his side and died from a gall bladder infection.
By the time I was five all of my brothers had moved out, were married and raising their own families.
Mom had been sick all of her life and couldn't work.  When she was young the doctors told her parents that she wouldn't live to be past three years old.  She fooled them all and lived to 72.  She was 43 when she had me.  She had a huge sense of humor. Something she passed on to my brothers and I.
I loved my Mom but she had emotional and physical problems.  She was never satisfied wherever she lived, which probably explains why we moved at least once a year as I was growing up, until the age of 13.  After that we moved only twice, until I moved away at age 20.
We were poor.  So poor that we lived in old beat-up homes, ate government surplus food and got by with very little.  Although we were poor Mom insisted we be neat and clean and show respect to others.  I guess that advice stuck with me because I still call people Mr. and Mrs., unless they tell me otherwise.
We got by only on my Dad's Social Security check and the small amount we got from Aid To Dependent Children-less than $300 combined.
The funny thing is I never considered myself poor.  We always had a place to stay, cloths on our backs and food to eat.  Mom made sure I got gifts for holidays and birthdays and my brothers helped when they were able.

Mom taught me to love to read and often times I would spend my ten cents lunch money on Scholastic Books at school.
Mom wasn't big on discipline and supervision.  I was pretty much left to my own devices. But because I had so much freedom I never took advantage of it.  I determined at a young age to work for what I wanted and to avoid drugs, alcohol and smoking.  Looking back now I realize God was watching out for me.
I wasn't a perfect child by any means.  Fortunately I had three best friends, Tim Arble, Tim Nicholson and Alden Monroe.  They were like brothers to me and their parents treated me as one of their own-especially Tim Nicholson's parents.

Mr. Nicholson was a big man commanding a big baritone voice. If I got out of hand he would straighten me out-quick!  I loved him and his wife dearly.
Growing up I had the run of my small town.  I knew every back road and alleyway.  I loved going to the neighborhood movie theater where admission was 25 cents on Saturday, popcorn was a dime, a Coke a nickel and a giant candy bar five cents.
I frequented Pinch-A-Penny, the local quick shop where I worked as a young teenager, loved walking through the toy aisle at the Five &  Dime, checked out the power tools at Gambles', started my first savings account at the corner bank, bought groceries with my Mom at Jerry Breen's IGA, purchased sliced lunch meat at a Mom & Pop grocery, visited Mr. Doliber at the Shutter Shop where we shared our love of comic books and bought my weekly supply of comics at Fosters' Rexall Drugstore.
I loved being treated at the drive-in A& W to fries and a root beer, bought penny candy at Beagle's store on the Southside of town, paid three cents for day-old donuts at the bakery and ate spaghetti at the Italian restaurant.
I recall swimming at the steps on the railroad overpass over the Huron River and swinging from a cable rope or taking the 40 foot plunge from the top of the steps.

My friends and I would explore the Mill Pond and sneak into the 'haunted' pump house, canoe to Camp Dearborn and Kensington Park, dare each other to run through the Milford Cemetery at night past the Union soldier statue, trudge through the snow at Proud Lake Recreation Center and precariously make our way down the stepped man-made waterfall downtown.
Each summer Milford would have a Sidewalk Sale with both ends of Main Street blocked off.  A Ferris Wheel and other rides were erected for three full days as shop owners sold their merchandise at a discount just before school started.
At ten years of age I got my first paper route and delivered my papers come rain, sun or snow-sometimes at 20 degrees below zero. My brother bought me my first bike for the route: a Stingray with a banana seat and high handle bars.
In the winter we'd go tobogganing, ice-skating and sledding.  I still remember flying down the steep hills at Moore's Lake, flying off the end of the dock and shooting across the frozen lake.

Often my oldest brother's kids would spend the night with their 'favorite uncle' and we'd have a blast.
I had a wonderful childhood, full of love, laughter, family and friends.  There were bad times of course, for sometimes weeks at a time Mom would go into the hospital.  I would be left alone to tend to the house, wash my own cloths, buy groceries, feed myself, clean the house and go to school.  My brothers would look in on me, but I was mostly on my own.
It taught me to grow up fast.  The experience also taught me to be self-sufficient and flexible.  A lesson I took into adulthood.
So many memories:  My first car, the first time I kissed a girl and hitch-hiking with my friend Tim Arble to Flint, Lansing or wherever the urge took us.  Staying over night at my friends and doing the things young boys do-like staying up too late and doing silly things.

I  Discovered Rock and Roll and a talent for art, joined the Drama Club, worked at a liquor store when I was 15 because I was big for my age, stood up to the town bully and became close friends, nearly got hit by a train, almost drowned, went to the hospital for dehydration and measles and collected comic books and struggled to find a male role model from TV shows like Star Trek, The Man From U.N.C.L.E., Batman and others.

School was a blur and a bore to me.  Today I would be labeled as having A.D.D.  My days consisted of getting up, going to school and working most evenings.  Still I managed to have a lot of fun cruising around with my friends, going to the local mall, sneaking into the drive-in theater and soaping windows on Halloween.
People I remember are Mr. Foster, Mr. and Mrs. Barnett (our pastor and his wife), Mr. Doliber,  Mr. Silver and Mr. Schultz from Pinch-A-Penny, Dell from the liquor store, Mrs. Heck, and Mrs. Peck (two for our landlords), several of my teachers: Mrs. Johnson and Ms. Tichner (my art teachers), Mr. Garshaw, Coach and so many others.
There was my cousin Mike, my aunts: Lottie, Ester and Dorothy, Pauline and Leona and my uncles: George, John and Curly.
When people ask me what my hometown was like I tell them, "It was like Mayberry."

Everyone knew each other and watched out for one another.  Houses had porches, kids played outside until it was dark, no one worried about crime.  Doors were left unlocked, keys left in cars, kids walked to school, to friends and all over town without parents worrying about them and respect was always shown to parents, policemen, servicemen and others.
A simple handshake was a man's bond.  Parents were obeyed and most of all-loved.

Families stuck together through thick and thin. People were proud-in a good way. Neighbors helped neighbors.  People went to church and lived by the Ten Commandments.
Looking back now I realize that God's guiding hand was on me. Even though I was not saved until my mid-twenties God spared me much heartache and pain.
There were sad times, like loosing a friend or life's disappointments.  But through it all God was there.  He was the father I never had, even though I didn't know it at the time.
I moved to California, came back, went to college for two years, moved to Homestead Florida, attended the University of Miami, met my future bride, married in 1979, raised two great kids and have managed to survive it all.
Times certainly have changed.  I feel sorry for many of the young people growing up today. Everything is so busy and complicated.  There are so many temptations present now that I never had to face.  May God have mercy on our nation.