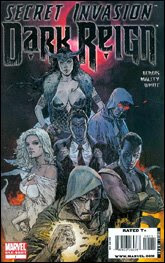 One of the biggest changes to the Marvel Universe after the events of Secret Invasion promises to reshape the entire Marvel mythos. S.H.E.I.L.D. is no more, Tony Stark is ousted and Norman Osborn (the Green Goblin) is put in charge of the nation’s security, including control of the Initiative.

Always hungry for power, Osborn hatches a plan where he will come out with even more power. In a secret meeting with Doctor Doom, Emma Frost, Namor The Submariner, Loki and The Hood, he outlines a plan by which together, they will control the entire planet and Asgard. Should their activities be suspect, Osborn promises to umbrella them under national security.

All agree to the plan, some reluctantly, others with their own agenda in mind. Regardless of each of the participant’s motivation, the marvel universe as we know has changed and not for the best.

Be sure to follow the Dark Reign crossover event over the next several months to find out what marvel’s heroes plan to do about it-if they can do anything at all.
Bendis, Maleev and White deliver a hard-hitting lesson on real world politics masquerading as comic book story. Much of the story’s content mirrors current events. Our world, like the Marvel Universe, is going through turmoil and change. Will it be for the good or has mankind taken one more step forward to its ultimate demise? You decide.
Posted by BAM at 8:58 AM