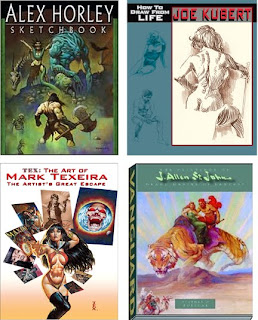 Recently Vanguard Productions released four new books in its artist’s series.  Before I begin reviewing each book individually I’d like to comment on the books as a whole.

Vanguard has done an excellent job selecting the stock that best complements and enhances the art in each of its books.  Both the cover and interior pages are of coated stock, yet not so high gloss coated as to be too reflective and detract from the art.

Paper stock also determines ink absorbs ion which is especially important when it comes to text.  Text must be crisp and clean and easy to read.  So is the case in Vanguard’s books.

Paper stock must be stable enough to trim leaving crisp edges and no fold over, display colors in their proper hue and intensity, handles scoring and keep small details from smudging or disappearing all together.  Binding must be snug with tightly bound, stitched or glued pages so that the books hold up. All of the books do just that.

Copy structure is equally important in art books.  Too much copy detracts from the art, not enough leaves the readers slightly frustrated having not received enough information.  I was impressed that in each art book I’m about to review that their was just enough copy to hold my interest, of appropriate size and line spacing (leading) for easy reading and very informative context-containing not only interesting facts about the art but facts about the artists as well.

I felt that after reading each book that I knew the artists personally as well as their motivation, work ethic and capabilities.

Overall production value on each book rates high.  I plan on making these titles an important part of my collection.  Well done.

The Paintings Of J. Allen St. John: Grand Master Of Fantasy by Stephen D. Korshak is a treasure trove of information on the artist’s life as well as a wonderful showcase for his art, both black and white and color.

The paperback cover immediately grabbed my attention with its painting of a giant tiger with two people on its back.  It’s easy to see the influence St. John’s work had on such artists as Frank Frazetta and many others.  As with all the color paintings in the book, the cover painting consists of vibrant brush strokes, stylized character poses and a dynamic composition.

I have to admit I was not that familiar with Allen St. John’s work.  I’ve seen it reproduced before and I knew that his work graced many pulp magazine covers but I had no idea how extensive his work was or how important it is to modern fantasy art.

Writer Lin Carter provides the introduction to kick off the visual tour of St. John’s work through the early to middle parts of the 20th Century.

Artist Vincent Di Fate, a renowned artist in his own right, provides the copy for the first chapter.  He examines St. John’s artwork and how it matured over the decades.

Following chapters look at St. John’s career beginning with his early days a struggling young artist trying to establish his own style and career.

Starting at his youth the book looks at his struggle to set a course for his art.  He struggled to decide whether to be a fine artist, illustrator, portrait artist or author.  Ultimately he decided upon a little of all four with most of his work concentrated on fantasy paintings.

As he grew older he found himself in high demand as a book illustrator, magazine and book cover painter and perhaps his best known work as the artist who defined and set the standard by which all other Edgar Rice Burroughs’s Tarzan and John Carter of Mars artists followed.

For a period he did Western paintings, high adventure, mystery and science fiction work.  Regardless of the genre, St. John defined and refined each in its time.

I really enjoyed this book and its look back at a giant of fantasy illustration and painting.  I found myself recognizing the style elements of artists who followed St. John in the fantasy and science fiction illustration field.  The man’s hand can be seen in many of today’s best artists work.

For a wonderful history lesson and fascinating look at one of the most influential artists of modern times be sure to pick up The Paintings Of  J. Allen St. John: Grand Master Of Fantasy.

Another master of illustration who began his career in the 20th Century is cartoonist and illustrator Joe Kubert.  Often referred to as one of the legends of comic book illustration Kubert downplays his fame.  In his 80s, Kubert still produces huge amounts of work both as an instructor at his Joe Kubert School of Cartoon and Graphic Art and as a commercial artist.

Joe began his career in the Golden Age of comics, and continues to produce viable and valuable pieces of art.  His recent foray into the graphic novel field has garnered him praise both inside and outside the industry.  His style has influenced such comic book luminaries as New Adams, Joe’s sons: Adam and Andy, and scores of established artists.

Kubert’s style can best be described as minimal.  He believes no line should be wasted or any work of art overdone.  You can see it in all of his illustrations, cartoon or otherwise.  His clean crisp line work, strong sense of design and mastery of light and shadow and his drawings of the human figure are without peer.

Joe continues to improve his style and try new techniques and media.  In How To Draw From Life, Kubert offers lessons on drawing the human figure and face in a series of one minute to multi-minute demonstrations and examples.

Work contained in the book spans his many years as an illustrator and demonstrations show how sparse lines and careful studies of the human form result in beautiful illustrations.  His demonstrations on lighting, perspective, page composition, and technique are all complemented by insightful text and instructions.  It’s easy to see why Joe Kubert is renowned and revered in the comic book industry.

I was unprepared and caught off-guard when I saw his commercial art work and paintings.  The man is a powerhouse of imagination and a master of illustration and painting media.  His new book, co-written by Renee Witterstaetter, looks into his impressive career.

Mark was born and raised in New York City amongst somewhat less than savory surroundings.  As a young man he was entrenched within a rough environment with street gangs and poverty all about hi,.  Still his dream to become an artist motivated him to create despite his situation and with the encouragement of a teacher Mark was able to enter a prestigious art school and excel.

Soon after gradating he acquired work and has been producing art ever since.  Besides his comic book work Texiera is also an accomplished painter and illustrator with works gracing book covers, movie production pieces, trading cards and other commercial art projects.

The Art Of Mark Texiera contains examples from all of his projects.  What I really liked about the book is that it contains sketches and preliminary drawings for much of Mark’s finished paintings.  I enjoy seeing how he puts his ideas down on paper and formulates his final work.  Too often people who look at an artist’s wok don’t appreciate the amount of time and effort it took to create the final piece.

Mark is very candid about his background, his education, his work and his life in general.  His observations and insights into producing art are invaluable and his wicked sense of humor often shines through his prose.   The book is well laid out with black and white illustrations and color paintings evenly distributed throughout its pages.  This makes the book fun to look at as visual treats pop up unexpectantly.

Mark Teixeira’s work is well represented in its pages and both looking at and reading the book is extremely satisfying.

Hailing from Milan, Italy, artist Alex Horley has taken the comic book and fantasy and science fiction worlds by storm.

Trained as a classical artist, Alex’s love for fantasy soon began infiltrating his work.  Coupling his mastery of the human form and painting he infused fantasy with reality to produce some of the most striking fantasy paintings ever seen.

In the Alex Horley Sketchbook Alex leads the reader through his career and offers some helpful artistic insights and comments on his various projects in the fantasy and comic book fields.

The book contains examples of his art from all of the fantasy genres and provides sketches, comprehensive drawings and final pieces both in black and white and color that showcase his mastery of style, human anatomy, lighting and shadow, composition and environments.

Take a moment to absorb the sheer beauty of his value studies with their strong asymmetrical and symmetrical balances, overlapping figures and dynamic poses, his fine use of line and shading and composition.  I know how difficult it is to arrange elements on a page to make them interesting.  I tip my hat to his talent.  He truly is a master of composition.

Equally impressive is his ability to create art in different styles.  Although he has his own unique ‘take’ on subject matter, he is able to emulate other artists’ styles and transform his work to fit any particular project.  It’s no easy task as I can attest.  I’m often called upon to change my style to complete a project.  Once again I bow to his expertise.

Purchasing all of these books from Vanguard Productions is money well spent.  As a veteran artist or novice it would be a wise investment to purchase these books not only for their visual value but for their instructional value as well.