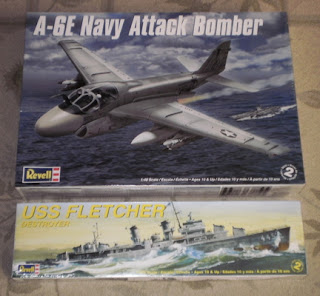 Sculpted in 1:306 Scale, the USS Fletcher was a survivor of WWII and soon after was converted to a Destroyer complete with rocket launchers.  The model made by Revell is an exact duplicate of the Fletcher.
When assembled the model can be detailed in its WWII configuration with gun turrets and depth charges or converted to its later Destroyer status complete with rockets.
Cool details include rotating gun turrets, full deck and underbelly details, life rafts, deck guns, railings, hatches, towers, control rooms and more.  Custom decals can be added to give the ship the look of authenticity and the easy-to-follow instructions make assemble easy and paint application spot-on. Part trees are clearly marked and parts detach easily with little or no flashing and cleanup. Display the ship on or off its display stand.
The A-6E Navy Attack bomber is a Level 2 model scaled at 1:48.  Equipped with two powerful J52-P-8 turbojet engines the A-6E carries an impressive load of ordinance and state-of-the-art equipment.  It's cockpit holds two side-by-side pilot seats and full instrumentation.
With its oversize cockpit windshields the A-6E provides maximum visibility for its crew.  Full radar capabilities make it virtually impossible to take by surprise and capable of spotting incoming aircraft and ships with ease.
Armament include bombs and missiles and extra external fuel tanks increase its range.  Look for working landing gear, full fuselage detailing, undercarriage hatches and two pilot figures are also included.  Follow the detailed instruction for painting and decal application and your A-6E Navy Attack Bomber with look just like the real thing.  Bombs away!
Posted by BAM at 6:14 PM