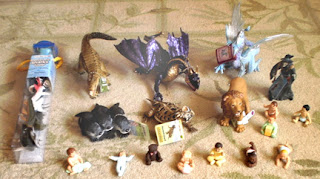 If you love miniature animals, critters, people, things and more then you're sure to get a thrill about Safari Ltd.'s new 2011 collection.  All of the mentioned items boast first-rate sculpting, excellent paint application with no slopover or messy application, exciting and natural poses and an impressive attention to detail.  Here's a few more releases that you can expect to find in stores.
Fable lizard fans are sure to get excited by two new dragons.  The deep purple, iridescent Midnight Moon Dragon is a huge beast with long serpentine tail, leathery wings, gold accent horns and scales and four red eyes.  Its hooked snout and powerful claws is sure to make short work of any knight or would-be hero.  No quite as massive but just as intimidating is the Ice Dragon.  Colored snow blue with a lavender belly, the silver-accented giant lizard stands menacingly with its mouth open and claws at the ready.
Two lizards (one prehistoric and one modern day) are smaller versions of their legendary mythical cousins -- only they have real claws and teeth.  Appearing like a large crocodile on long legs is the Kaprosuchus.  Its ridged head, massive jaws and powerful torso gives evidence of just how dangerous this prehistoric beast was.  Smaller, but nasty when it wants to be, the Horned Lizard is a study in camouflage with its multi-hued skin patterns.  Looking almost regal with its horned head, slender legs and decorated body, the Horned Lizard is a bizarre but beautiful creature.
Otters are nature's clowns.  Put three of them together and let the circus begin.  The trio of North American River Otter Babies are so cute and realistic you almost forget they are sculpted figures.  With their stubby deep gray bodies, white muzzles and button eyes they are almost irresistible to hold.  The Lion is truly the king of the jungle.  This regal beast stands proudly with legs firmly spread, mouth slightly open and its long mane cascading around its feline face.
Sharks get a bad rap. They are predators true, but they do serve a purpose.  The Prehistoric Sharks Toob contains various species of sharks from which our present day sharks descended from.  Be careful when you open the Toob, you may just get bitten.
Medea The Witch beckons from the Days Of Old.  She personifies the image people imagine when they think of a witch. She wears tattered cloths, a long pointed hat, carries a broom and has pale green skin.  All that's missing is the cackle.
Babies, babies, babies!  Sitting, standing, laying down, sleeping, black, white, newborn, toddlers-they're all here and Safari Ltd. has got them.  These cute tykes are pastel clothed bundles of joy both girl and boy.