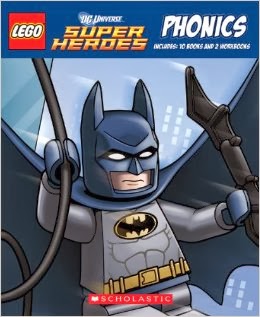 Super Heroes are popular and none more popular than the DC Comics Universe heroes.  LEGO has launched a line of LEGO figures fashioned after the DC characters along with animated features and games.
Scholastic has taken he LEGO DC versions of their super heroes and villains and used them to teach youngsters how to understand vowels on their first step in their journey on how to read and write.  Welcome to LEGO-DC Universe Super Heroes Phonics.

Come along with LEGO's DC characters as they guide you through the complexities of the written word and language.  Join Batman, Superman, Wonder Woman and other DC Comics heroes and villains as they teach vowels in Phonics in a series of short mini-books.