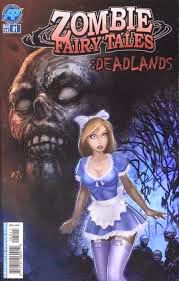 At first I didn’t recognize the characters from the Fairy Tale but once I caught on I was intrigued as to just where the story was going.  Alice, the White Rabbit, the Mad Hatter and all the rest of the much-beloved characters are present albeit in slightly disturbing forms.
Even the Cheshire Cat shows up-ya gotta love his no-nonsense and sarcastic manner.
Things have definitely gone bad in Wonderland-that’s what vengeance will do.  Additional pin-ups of the characters reimagined from Antarctic’s stable of artists make this #1 issue a real treasure. 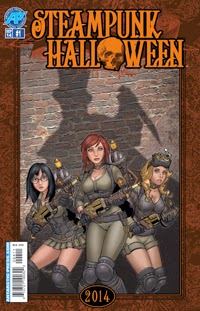 What happens when you mix cheesecake, Steampunk and the Ghostbusters into a Victorian Era crime and mystery story?  You get Steampunk Halloween 2014 from Joseph Wight and Ben Dunn.

When Jack The Ripper returns and begins terrorizing and traumatizing young women it’s up to the Steampunk girl investigators to track down the malevolent spirit in their custom made ‘ghost’ mobile and trap him with their Steampunk ectoplasm equipment.

It’s Steampunk versus spirit in this delightful tale of daring do and adventure.
Posted by BAM at 6:16 AM