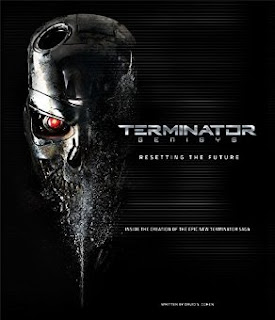 Yesterday Bill (a friend of mine) and I went a watched the new Terminator Genisys movie.
Both of us were excited by the trailers we've seen of the movie and what possible new twist(s) the new movie would show.  Our hopes were high.  We were not disappointed.
Both of us loved the movie.  While paying homage to the original first two Terminator movies the new movie successfully introduced new time-travel twists the successfully rebooted the series.
As excited I was about the movie, I was even more excited by the special visual effects.  I've always been a sucker for Hollywood magic and there was plenty of visual tricks used in the film.
I love it when I come away from a movie and find myself asking, "How did they do that?"
Insight Editions was kind enough to send me a copy of its new Terminator Genisiys: Resetting The Future book that goes into exhaustive detail about the film.
From pre-production to post-production the book covers it all.
Inside are sections on cast selection, costuming, weapons and accessories, vehicles, the Terminator designs and their equipment, set design and implementation, visual and practical effects, stunt work and more.
If you are a film fanatic like I am you will eat up this book.  Packed with full-color photos from the behind the scenes and during filming, cast and crew interviews and comments, production staff inner workings and showcasing the entire process of making a big budget film are also included.


It is a gorgeous hardbound book with a spot varnish image of a Terminator head on its cover it includes a foreword by Arnold Schwarzenegger and is written by David S. Cohen.
Posted by BAM at 10:55 AM