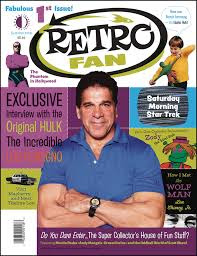 Now this is my kind of magazine!  Being the old fuddy duddy I am I prefer nostalgia over the modern day and that especially holds true when it comes to TV series and movies.
One of my all-time favorite superhero to TV adaptations was the 1970s version of the Incredible Hulk starring Lou Ferrigno as the Green Goliath and Bill Bixby as his human counterpart—David “Bruce Banner”.

In this premiere issue RetroFan manages to obtain a Hulk of an interview with the man himself: Lou Ferrigno!

Lou talks about his Hulk and movie career along with other guest appearances and his life in general. There’s even a full-color TV Hulk mini-poster!

As popular as the Hulk is there is bound to be commercial tie-ins, toys, etc.

Stretch Armstrong was a popular toy.  Give him some more muscles and paint him green and you get the ultra-rare Stretch Armstrong Incredible Hulk.  The MEGO stretchable Hulk is a bonafide collector item that any green-blooded toy collector is sure to want to own.

You know you are a TV addict when you can answer the Too Much TV Quiz.  Are you a fanatic?

The Phantom was one of the most popular comic strips in its day.  The Ghost Who Walks kept the jungle safe and thrilled readers for decades.

Unfortunately his movie and TV adaptations have little to recommend.   Learn why The Phantom never had a ‘ghost’ of a chance on TV and in the movies.

Star Trek The original Series left the airwaves in 1969.  Viewers, NBC and its cast and crew believed that would be the end of it.  What they didn’t count on was reruns.

Suddenly the failed TV series that lasted only three seasons was a huge hit.
Gene Roddenberry, never one to let an opportunity pass him by, capitalized on the newfound success.
In a surprise move, Filmation agreed to produce an animated Star Trek series, starring the voices of the original cast: sans Walter Koenig as Chekov.

The series premiered in the mid-1970s and it was a hit-so much so that it won an Emmy.

What makes the show so unique is that it was not written for kids.  Many of the scripts were from Star Trek alumni and the quality showed.  In fact, many of the show’s storylines are considered Star Trek canon.

It’s a real treat seeing some of the original production and finished art along with some behind-the-scenes goodies.

Readers get the chance to meet the ‘real’ Wolfman, tour Forest Ackermann’s residence with its entire sci-fi and monster movie memorabilia and catch a glimpse of how some of the classic movies were made.

Do you remember Mr. Microphone? I do!  Boy, did I get in a lot of trouble with it.

Mayberry lives in Mount Airy, NC, the town Mayberry was based upon.  Take a wonderful tour of Andy, Barney and other residents of Mayberry through its street and visit the shops, see the TV show props and even ride in Andy’s patrol car!

Betty Lynn who played Betty Lou in the series is interviewed and she recalls her Mayberry days and the cast and crew of the series.

The Andy Griffith show collectibles are highly sought after and demand big bucks.

Go explore your attic, basement, closets and garage-there’s no telling what you might find!

There are some real odd ball comic books out there.  RetroFan hunts down some of the oddest.  Get ready for an oodle of oddness!

Whether its toys, comic books, movie and TV memorabilia, whatever you collect have fun and while you’re at it check out some of the collectibles in Too Much Stuff And Too Little Time.

A really enjoyed looking through and reading RetroFan #1 from TwoMorrows Publishing.  If you’re a ‘retro’ fan such as me, then this is the magazine for you!
Posted by BAM at 12:38 PM