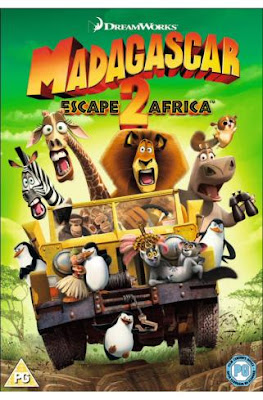 It had to happen-Dreamworks Animation released another Madagascar computer animated film this last summer and it is now on DVD.

All of your animated animal castaways favorites are back and this time they’re in Africa. When the gang of zoo misfits board a reconstructed plane manned by the penguins they should have known there would be big trouble ahead.

Miraculously the cobbled together wreck manages to stay airborne—until its fuel runs out over the ocean. The plane takes a nosedive and by some quirky twist of fate crash lands in Africa-the ancestral home of Alex the lion.

Everyone survives and soon discover an oasis of water populated by thousands of animals-two of which are Alex’s parents, who assumed he was dead after being kidnapped by hunters when he was a cub.

The happy reunion is short-lived when Alex is put through his long delayed right of passage and promptly gets his furry behind kicked. His disgrace and defeat force his father to step down and be banished with his son.

Meanwhile the other plane passengers must cope with trying to meld back into the wild-something none of them are prepared to do.

Eventually the friends reunite Alex and his father save the day and all is well-yeah, right! Madagascar; Escape 2 Africa is not quite as funny as the first Madagascar film but it still has its moments. Check out the running shark gag and the head Penguin’s unrequited love for a windshield hula girl. The plane crash and volcano sequences are especially funny.

The 2-disc DVD set includes the entire movie and extras on one disc with Nickelodeon’s The Penguins Of Madagascar cartoon sort with extras on the second disc. Both the film and the cartoon shorts are cleverly written, nicely animated and fun to watch for the whole family.
Posted by BAM at 2:50 PM