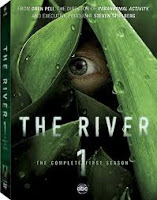 Normally a trip down a river has a calming and soothing effect.  Not so when TV personality Dr. Emmett Cole disappears while exploring the Amazon River.  His wife, friends and TV crew set out to find him.  At first all seems normal. Granted a river cruise deep into the jungles of the Amazon is no Sunday drive in country, but this cruise has its share of surprises.

Wild animals, strange sights and sounds abound but when the would-be rescuers find the doctor's boat with no one on board things go from wild to weird.

Soon they find themselves deep in unexplored Amazon River territory where magic and danger abound and nothing appears as it seems.

Steven Spielberg, Oren Peli and ABC Studios present the Complete First Season of The River, a terrifying TV series that turns a river cruise into a battle for survival.

Also included on the DVDs are featurettes, deleted scenes, commentaries and more.
Posted by BAM at 7:00 PM