Wrath Of The Titans 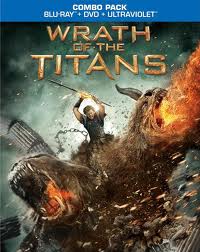 Liam Neeson returns as Zeus and Sam Worthington his human son Perseus in a (pardon the pun) titanic battle between the gods.

Kronos is free from his prison (father of Zeus, Hades and Poseidon) and he, along with the Titans, battle the gods.  Hades (played to villainous perfection by Ralph Fiennes) betrays and manages to capture Zeus and bring him to the Underworld .  It's up to Perseus to free him, save his family and humanity.

One problem-Perseus is one rusty warrior.  For the past 10 years he has been content to lead the life of a simple fisherman and raise his son.  But, when his son and father are threatened he must reluctantly take on the mantle of the half-human warrior and set about slaying man, beast and god.

The Blu-ray/DVD/Ultraviolet Combo Pack comes with some cool extras such as deleted scenes, featurettes on the gods and man, behind the scenes glimpses, storyboards and more, courtesy of Warner Bros.
Posted by BAM at 1:09 PM