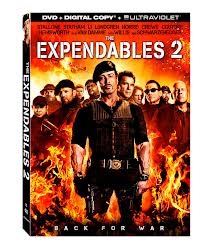 The concept was a clever one.  Take a band of 1980s and 1990s movie action heroes and team them up in a new action movie as a band of mercenaries.  Sounds implausible?  That’s what many in the movie industry thought until the movie, The Expendables, became a runaway hit at the box office.  In fact it was so popular that an Expendables sequel was produced.

That movie, The Expendables 2, stars many of the same old school action heroes, Sylvester Stallone has the top billing, but also throws in a few of the more recent action heroes.

In The Expendables 2 Barney (Stallone) and his band of old school mercenaries take on what they think is a simple in and out job.  Things turn from bad to worse when one of their own is killed, they meet up with a psychotic killer hell-bent on revenge and find themselves entangled in a plot to sell tons of weapons grade plutonium to the highest bidder.

The Expendables2  is bigger, badder and better than the original film and reintroduces audiences to such action heroes as Willis, Schwarzenegger, Norris, Van Damme and Li.  This movie is not to be missed.

Extras include a director’s commentary, four featurettes, deleted scenes and a gag reel.  Spend your time and money on The Expendables 2.
Posted by BAM at 6:17 AM