The Legend Of Tarzan 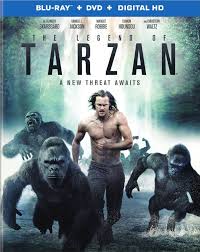 For serious book readers out there who have picked up the classic book Tarzan Of The Apes, and its sequels, by writer Edgar Rice Burroughs, the new 'The Legend Of Tarzan' strikes a familiar cord.
Unlike many previous Tarzan movies and TV series the new Tarzan movie harkens back to the original premise of the classic Tarzan book.
Like the book the movie looks into the origin of Tarzan, including his been raised by apes.  Viewers get to see Tarzan interact with the apes, become one of their own and return to his humanity.
Tarzan (John Clayton, Lord Greystoke) has left Africa, returned to his civilized life as a wealthy lord and married his sweetheart Jane.
But when he is invited to return to the Congo as an emissary he soon discovers that things are not as they appear.  There are sinister forces at work and soon Tarzan must reclaim his ape heritage to battle a murderous plot of revenge and greed.
This is Tarzan as he was meant to be seen: untamed, ferocious, deadly and King Of The Jungle.
Warner Bros. presents The Legend Of Tarzan on a new Blu-ray/DVD/Digital HD Combo Pack complete with plenty of featurettes about the film, its cast and crew and the challenges of translating the adventures of Tarzan to the Silver Screen.
Stunning vistas and special effects, tooth and nail fight and action scenes and an underlying love story for his wife and animal family capture the essence of Tarzan as originally envisioned by Burroughs.
Posted by BAM at 3:59 PM