Batman: The Return Of The Caped Crusaders 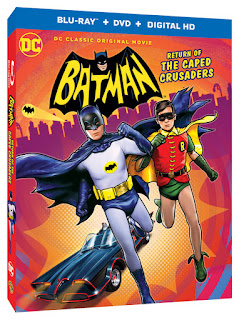 Holy nostalgia Batman!  Get ready for some cheesy and so much fun return to the campy Batman TV series from the 1960s translated to animated form.
Starring Adam West as the voice of Batman, Burt Ward as the voice of Robin and Julie Newmar as the voice of Catwoman, the Caped Crusaders are joined by their classic cadre of super villains: the Joker, the Riddler, the Penguin and Catwoman.  Throw in other classic Batman TV characters such as Commissioner Gordon Police Chief O-Hara, faithful butler Alfred and Aunt Harriet and you have a real video treat.
The four villains join forces to steal a deadly duplicating machine to complete their nefarious plan to rule the world from their orbiting headquarters.
The only problem is they duplicate Batman, wind up with a villainous Batman and a traitorous Catwoman to stop their plans.
It’s camp as its most outrageous in a delightful tribute to the classic Batman TV series perfectly recreated in animated form with all its kitsch intact.
Extras include featurettes about the cast, a look at the voices behind the villains, several previews and much more, courtesy of Warner Bros.
Posted by BAM at 4:28 PM