Get ready to be ‘terribly British’ as Titan Books presents two books about two British superstars that live their lives fraught with danger.

Did you know the James Bond also starred in comic strips? 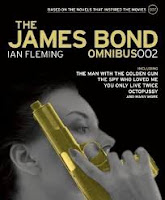 In The James Bond Omnibus 002 readers are treated to On Her Majesty’s Secret Service, You Only Live Twice, the Man With The Golden Gun, The Living Daylights, Octopussy, The Hildebrand Rarity and The Spy Who Loved Me in full, living black and white!

It’s quite remarkable to read the collection and see the differences between the comic strip adaptations as compared to the films.

The comic strips are much more faithful to the novels and manage to pack action, danger, excitement, intrigue and suspense in just two to three panels each. Ask any video game player who Lara Croft is and they can tell you, “She’s Tomb Raider.”

Angelina Jolie was the first to portray Lara in film. Now newcomer Alicia Uthaug takes up the tough and resourceful role of Lara Croft.

In Sharon Gosling’s new book, Tomb Raider The Art And Making Of The Film, readers learn about the massive undertaking of translating Lara’s exploits to film.

The film explores Lara’s slow transformation into the intrepid explorer she is known as today.

Each facet of the film is explored: from choosing the actors, scouting out locations, costume and set designs, practical and special effects, pre and post production, concept art and so much more.

It’s a remarkable book about a remarkable film that breathes life into the one of the most iconic pop culture figures in recent history.
Posted by BAM at 2:54 PM