Déjà Vu All Over Again 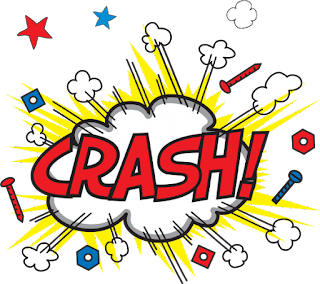 Although I stopped buying comic books over three years ago-primarily for the lack of funds, I still keep up with current trends.
And what I see bothers me.

Just like in the early 1990s when comic books took a sudden upswing in popularity all the signs point to an imminent crash.

There are too many comics for too few collectors.  Comic book print runs continue to dwindle and prices continue to rise.

There are only so many diehard comic book collectors.  Comic books, like other pop culture items, tend to sell to non-collectors when tied in with other events, such as movies, TV shows, etc.

After the initial thrill is gone, print numbers start to decline.  Case in point: for several years The Walking Dead comic books flew off store shelves-until it reached a saturation plateau.  As the TV show audience shrank and the show’s popularity waned, the comic book also has taken a hit.

‘Special’ comic books are all the rage.  Back in the 1990s special ‘enhanced’ covers sold comic books with promises of escalating prices.

The same thing is happening now with alternate covers by specific artists.  Like the 1990s the market for such books is about to burst.  Comic book covers ‘do not’ make a comic book valuable-it’s the story, event in the story and the rarity of a comic book as a whole-not just the cover.

As long as collectors are willing to plop down big money for ‘variant’ covers prices will continue to escalate, plateau and crash.  A variant comic book worth $100 today will sell for less than a tenth of that in just a few years or even months.

Like the crash of the 1990s speculators are driving the market (collectors or not).  As soon as they try to sell their ‘variants’ or supposedly ‘rare’ comic books such as the first appearance of Cable, Deadpool or Venom, and discover that there is an overabundance of said issues (check out E-bay if you don’t believe me) the market will suffer.

As to slabbed comic books: in my opinion it hardly seems worth the time, effort or money to slab (certify) a recently printed comic book (unless it is truly rare).

Oftentimes the cost to certify such books cost more than the books will be ultimately be worth.

I suggest certifying books that are truly rare or old.  It makes sense to certify a book listed in the tens or hundreds of thousands of dollars-for conservation, if nothing else.

As to the sudden price spike of old comic books, it is getting ridiculous.  How is that comic books worth in the hundreds of dollars as little as five years ago are suddenly worth thousands of dollars?  Who determines that price hike?  Store owners? Collectors?

Not really-it’s the certification companies. How else do you think they make their money?  The higher the value of a comic book the more money they make grading it.

See how much luck you have selling a comic book worth thousands of dollars to the average collector or comic book shop.  Chances are you will get only a fraction of the market value.

It amazes me that a comic book can be slabbed and suddenly its worth triples its value. And yet that same book unslabbed is worth less!  What’s really worth the money?  The comic book or the sealed certified container it comes in?

I’ve been reading and collecting comic books for a long time.  All the warning signs are there for a crash but few people are paying attention until it comes too late.

I’ve seen it happen with sports memorabilia, trading cards, toys, etc.  Anyone remember the Beanie Baby crash?
My advice is to buy the comic books you are going to read-regardless of cover variations, etc.  If it goes up in value and you can make a few bucks-good for you.  Just remember, very few modern comic books retain their value.  Check the dollar box and you’ll see what I mean.

As much as I love comic books I’ll stick with the older issues. I’m not saying that there aren’t any new comic books that are good reads-there are.

But, the older comic books, I’m talking about the 1940’s to the mid 1980s, were unique in that they offered true escapism.  Very few had to compete against blockbuster movies, a plethora of pop culture collectibles and the like. Comic books mostly stood on their own and were not part of a merchandise machine.

That’s my opinion and I hope you take away a few tidbits of advice.  Regardless, if you do or not-enjoy comic books, read comic books and don’t worry about their worth.  After all, didn’t you get your money’s worth by reading the story and enjoying the art?
Posted by BAM at 9:43 AM