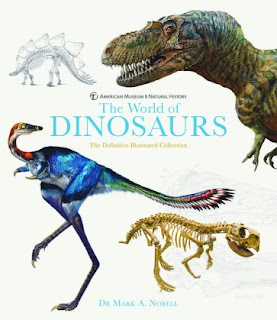 Ever since I was a little kid I’ve been fascinated by the giant lizards of prehistoric times: dinosaurs.  Big or small, carnivore or herbivore there is something majestic and tragic about this extinct species.
The great Thunder Lizards are the subject of Carlton Books’ and author Dr. Mark A. Norell’s new oversize, hardbound book: The World Of Dinosaurs The Definitive Illustrated Collection and definitive it is!

Beautiful, full-color paintings of each and every type of dinosaur is shown along with a brief treatise on each.

Photos of dinosaur’s bones, excavations, museum displays and historical text all combine to make this a dinosaur directory like no other.

Dinosaurs come alive as you look at each picture, imagine their thunderous beauty and might and travel back in time via your imagination through an open portal to prehistory. 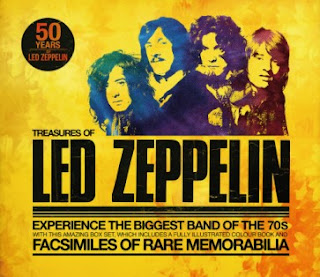 It was 1969; I was 16 years old and working at the local drug/convenience store.  Part of my chores was to stock up the latest 45’s and record albums.

I remember flipping through the albums and my eyes were immediately drawn to a white album with a black and white photo/illustration of a giant dirigible blimp in flames tumbling to the ground.

The album was simply entitled Led Zeppelin.  I scrounged together three dollars, bought the album, took it home, removed the album plastic seal, opened the album sleeve, gingerly placed the album on my small turntable, set the needle, turned up the sound and was blown away by what I heard.

The next day at school I was so excited that I shared the discovery of the album with whoever would listen.
“A Led Zeppelin!” “Are you crazy!?” “What zeppelin is made out of lead?”

Within a month the whole school body of students was talking about Led Zeppelin and it seemed like no matter where you went you could hear tunes from the album playing on the radio.  It was magic!

Here it is over 50 years since Led Zeppelin premiered (1968) and The Treasures Of Led Zeppelin celebrates the anniversary in a big way.

The book follows the band from its inception with photos, memorabilia, tipped-in document reproductions, bios, a chronology, concerts, a discography, a poster, historical text and much more.

If you are a ‘Led Head’ then you’re sure to want to pick up this incredible collection of hits, concert tours, reunions, solo careers and what to expect next.

It’s like 'A Stairway To Heaven!’ all wrapped up in a beautiful, hardbound book in a protective slip-in sleeve.  Rock on!
Posted by BAM at 4:05 PM