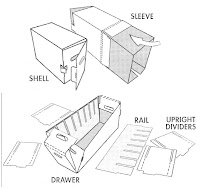 Recently I acquired several of DrawerBoxes Storage System's new Magazine DrawerBoxes.  If you're a serious comic book collector such as myself you also collect magazines not only about comic books but magazines about other popular culture items as well.
I've never really been satisfied with the standard magazine storage boxes purchased at local comic book/book/collectibles stores.  They tend to be too flimsy and easily damaged.  Plus, often I like to categorize more than one run of magazines in a box or break the magazines up into years.  When all of them are packed into one box it makes it difficult to locate a particular issue. 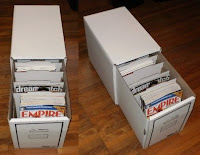 DrawerBoxes Storage System has solved those problems in a unique way.  Their Magazine StorageBox consists of an outer shell, reinforced by a slip in heavy duty sleeve, that fits over the sliding drawer of the box.  By designing the Magazine DrawerBox in such a manner it gives the box incredible strength, especially when it comes to stacking.
Cleverly designed Rails fit snuggly into each long side of the box held in place by the fold-over front and rear handle flaps.  Upright Dividers slip into the various slots in the Rails thus creating separate chambers in the box for various magazine titles or however you want to organize your publications.
As you can see be the accompanying illustrations and photos the entire assemblage makes for a neat, tidy and attractive storage container that will keep your magazines out of direct light, free from dirt and dust and safe from damage.  Rails and Upright Dividers are also available for Comic Book DrawerBoxes.
With the high cost of comic books and magazines today there's no better protection than DrawerBoxes.
Posted by BAM at 5:10 PM