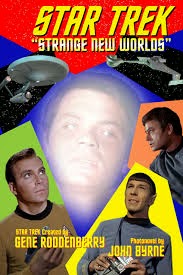 Artist/writer John Byrne is a huge Star Trek fan-especially of the original series.  Like myself he watched the series when it first came on the air back in the 1960s.
Before the days of VHS and DVD Star Trek fans clamored for anything Trek-be it audio recordings, photos, toys, etc.

One favorite was the Photonovels produced in the early 1970s.  The paperback books took actual color photos from film supplied by Paramount from episodes of the original series and arranged them on pages with dialogue balloons and captions. Twelve Star Trek Photonovels were produced.

Combining his love of Star Trek and the Photonovels John has compiled his own Photonovel by taking stills from various TOS episodes and creating an entirely new story.

“Strange New Worlds" takes readers back to one of Trek’s earliest episodes: the second pilot-“Where No Man Has Gone Before” and reunites Kirk with his long lost best friend whom through a freak accident gained godlike powers forcing Kirk to kill him-or so he thought.

Returning to the scene of the crime Kirk meets up with his old friend who has now transcended human flesh and has become a creature of the cosmos.

As with any John Byrne script there are plenty of twist and turns and John even slips in a few tributes to the series he loves so much.

A big hoorah to John and IDW for publishing this tribute to TOS and Photonovels.
Posted by BAM at 3:04 PM