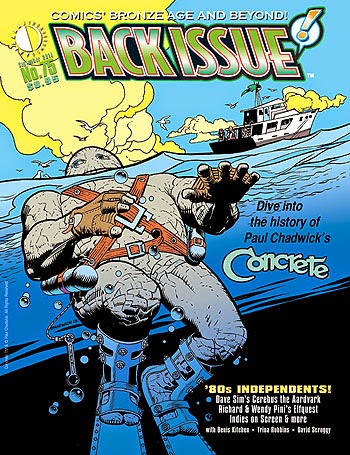 It’s Back Issue!’s 75th issue and to celebrate TwoMorrows Publishing looks back at the 1980’s Independent titles. Check out the Paul Chadwick Concrete cover and interior art featuring such characters as Cerebus, the Tick and other small press titles from Pacific, Dark Horse and more.
Here’s what’s in store:

FLASHBACK: The Life and Death of Cerebus the Aardvark
A close look at Dave Sim’s trailblazing, long-running series

PRO2PRO: ElfQuest Behind the Scenes: A Chat with Richard and Wendy Pini
How the husband-and-wife team crafted a fantasy classic from the ground up

BEYOND CAPES: There’s a Rattler in Your Kitchen Sink, Man
An overview of Death Rattle, with Baron, Ellison, Holmes, Kitchen, and Schultz

BEYOND CAPES: Katy, Trina, and the California Girls
Behind the scenes of Trina Robbins’ reader-participation comic

BACKSTAGE PASS: 1980s Independents: From Print to Screen
From Bucky O’Hare to The Tick, these indies made it to Hollywood