Astroboy creator/artist and animator Osamu Tezuka,  Anime writer Katsuhiro Otomo of Akira fame and Galaxy Express 999 director Rintaro combine their considerable talents to produce the stunning Metropolis Anime presented in all of its ground-breaking splendor courtesy of Mill Creek Entertainment.
Join the powerful leader of Metropolis, as Duke Red, who is about to release to the world a highly advanced robot named Tima fashioned after his deceased daughter.  He plans to use Tima to activate a powerful weapon atop a Ziggurat.

Duke Red’s son Rock wants nothing to do with the robot, or any other robot for that matter, and is hell bent on destroying Tima.  He tracks down the scientist who created Tima, destroys his laboratory, his notes and almost destroys Tima.

The detective assigned to the case salvages some of the dying scientist’s notes and retrieves the injured Tima,
whom he believes is human.  Before long the detective’s young daughter and Tima become fast friends.

Before the long the hunt for Tima escalates, resulting in a number of deaths, Tima’s realization she is a robot, her ascent to power to destroy humans and her eventual salvation.

Based on the classic silent film Metropolis, the Anime film is considered a classic by fans. Filled with incredible visuals and effects, boasting a powerful story and top-rate voice actors and actresses the film is a must-have for any Anime fan. 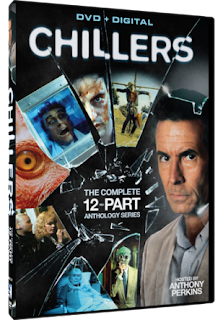 Actor Anthony Perkins (Norman in Psycho) hosts a 12-part series of tales so horrific, so frightening and so disturbing that they are guarantee to send chills up your spin.

Prepare yourself to have you blood run cold, to be scared to your marrow and send your heart racing as Perkins presents stories based on author Patricia Highsmith’s short stories.

An all-star cast of greats turn up the terror as they encounter the strange, bizarre, supernatural and evil in 12 tales of mystery, intrigue, horror and suspense.

Turn out the lights, settle in and get ready to be scared out of your wits by the DVD/Digital release of Chillers.
Posted by BAM at 3:27 PM