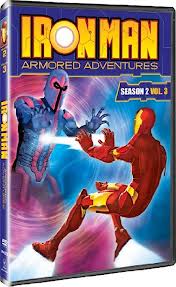 Join Iron Man as he tackles Magneto, the Iron Monger, Iron 2099 and a disgruntled S.H.E.I.L.D. agent wannabe.  The computer-animated adventures are packed with action, stunning visuals, high-tech weapons and armor and edge-of-your-seat stories.

When Tony Stark’s father dies in a plane accident, he is left as the sole heir to the mega-Stark Corporation.  Inheriting not only his father’s fortune Tony also possesses a brilliant mind just like his father.

Using his intellect toward the betterment of mankind, Tony is reluctantly forced to use his invincible armor to fight forces determined to destroy world peace.
Six episodes are included on the DVD each family-friendly.
Posted by BAM at 6:26 AM