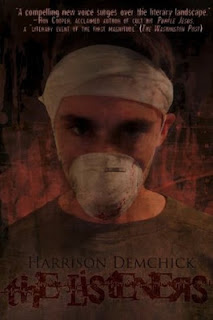 How do you tell who the good guys are?  That’s the dilemma 14-year old Daniel faces.

After a plague strikes a major city, turning its citizens in the shambling, blood-thirsty lunatics, Daniel finds himself alone after his mother leaves looking for supplies and doesn’t come back.
When a lunatic attacks Daniel’s home a group of ‘police’ come to his rescue-at a price.  Taking some of his supplies and valuables, the police leave after delivering a veiled threat.

Scared, alone and desperate for help Daniel comes upon an opposition group to the police: The Listeners.

Dubbed criminals and thieves, The Listeners take Daniel in as part of their group.  Their leader, Adam, takes a shine to Daniel and begins his training to become one of The Listeners.  But, as time progresses Daniel begins to question just who the good guys are and who the bad guys are.  The line is blurred and it’s up to Daniel to make the decision as to which side he will ultimately be on.

The Listeners, by Harrison Demchick, is a unique take on an apocalyptic vision.  Instead of focusing on the environment of horror the book pinpoints the true horror of the situation: the personal cost and choices made to survive.

The Listener comes from Bancroft Press.
Posted by BAM at 6:20 AM